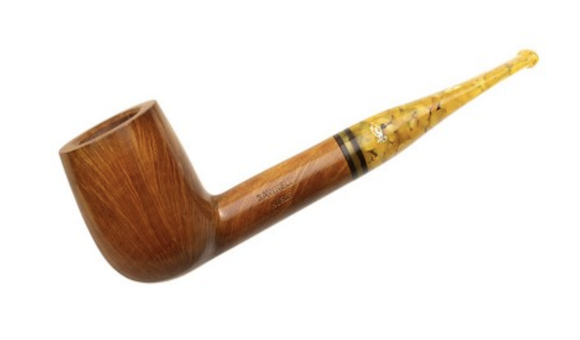 One day Twitter-free and I’m lovin’ it. Spent the time I would normally be getting mad, in front of an aquarium with my biggest Asikyan pipe. A good hour and a half. That was the most enjoyable time I’ve spent in a long, long time (not counting watching Ed the Arm Chair Piper videos). It really did a lot for my nerves, I can tell you that. It was like I used to enjoy a pipe years ago. I highly recommend it. Tomorrow will be out by the bird feeders. If you never hear from me again it’s because I’ve come to my senses.

Honey Of A Pipe

The Pipe Nook put out a notice yesterday afternoon. That Eddie has some of the Savinelli Honey-Themed Miele Pipes in stock. They are a pretty nice pipes and I’m happy to see him expanding his inventory to include pipes in other price ranges. He really has something for everyone.

This is what his Press Release said; Smooth, light blonde finishes, colorful honeycomb-patterned acrylic stems, and included special honey-dipper shaped tampers accentuate the honey theme of the Miele series. Each briar pipe’s seemingly bare chamber is specially treated with a light honey extract, ensuring a sweet-smoking break-in period! These pipes are positively bee-autiful (I gotta be me), and are available in 12 of Savinelli’s most loved and iconic shapes. If you’re looking to step up your Savinelli collection, this is a great place to start. Check out these fantastic pipes and see for yourself!

If you want a link to see what he’s talking about, click here.

I said I was going to cool it after Pipe Week and give myself a little break from my PAD, but I might have to make an exception. Just an opinion, but even though those darker stains are so classic, I think sometimes they cover up what would be a beautiful pipe. Unless the manufacturer really applies the stain correctly it can cover up unique grain that would give the pipe a personality. If you don’t have some of the lighter stained pipes in your collection, give it some thought.

I normally don’t talk about the voting process for the Pipe Week awards but I would like to say one thing here. When people say a certain channel wasn’t nominated, that is not exactly true. A lot of channels were nominated -Many! The list you saw on the Awards Show were the Top 5 of those nominated. So when you hear about someone who was not nominated like it was some kind of snub, keep in mind that if they have a decent channel, they probably were. To be in the Top 5 required a lot of nominations. That’s all I’m going to say about that.

Paladin PIper has scheduled the July Codger Hour. It is going to be this upcoming Sunday, July 3th at 7 pm Eastern. The title this month is Time, The Great Equalizer. Should be fun. If you want to be notified when it comes on, hit this link.

Going to leave you today with a video by Mr. Parsimonious Piper. Which is actually a response to Mottzilla. He has some thoughts on what makes the ideal summer smoke. For the most part I tend to agree with him. For me, the pipes I smoke in the summer tend to be a little different. More so than the tobacco. I’m not going to take a really good pipe outside. Also, because there is usually at least a breeze, I want a pipe that is not going to get too hot. Typically something with a little taller bowl, which I won’t fill all the way up.

Speaking of the Mottzilla channel, La Don’s son is having a give away to mark the one year anniversary of the passing of our old friend. Check out his video and enter the give away.