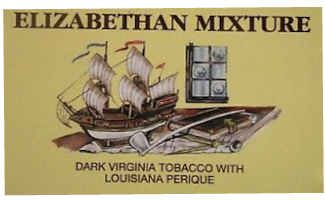 Ever since we heard that British American Tobacco was discontinuing out beloved Dunhill blends we pipe smokers have been a little bit on edge. Some of us moved on to a new Vaper or a different English or even an occasional aromatic without much fuss. Others have taken months to decide what our go to daily tobacco will be. I myself prefer a strong tobacco with a full bodied taste and a decent nicotine hit. So I have been mixing some Gawith brown number 4 twist with a little Ashton Artisan for some extra kick.

Now however there is hope for us all with the All New Peterson/Dunhill lineup. When I say all new I don’t actually mean all new, it’s more a sort of all original. I think. Anyway I got my grubby little paws on two of the new/original er hang on… Right it’s New Peterson blends. Specifically Elizabethan and Nightcap. So here is a review of both.

Let’s start with Peterson Elizabethan Mixture. The blurb on the website says:

We have a medium bodied Vaper, heat cured Virginias for a woody flavour to which the Perique adds a little spice.

Moisture from tin was perfect. No issues with packing or lighting.
Aroma from tin. Delightful. You get a big hit from the Virginias straight away. Then there’s definitely the woodsy type of smell. Reminiscent of a campfire. Very pleasant. I am biased as I’m a pipe smoker myself so I’m going to say it smells nice.

How does it smoke? I suppose the usual descriptors come instantly to mind. Cool. Slow burning. Satisfying. That’s not the only story here though. The Perique gives that tickle through the retrohale. It behaves well all throuout the bowl and leaves a nice fine Ash.


What you are most wanting to know though is, is it the same as before with the original BAT version?
Answer. Absolutely. It’s great. No difference that I can taste.
Shout out to Bradley from Stuff n Things whose ideas I borrowed and without whom I would never have even dared to try this review.