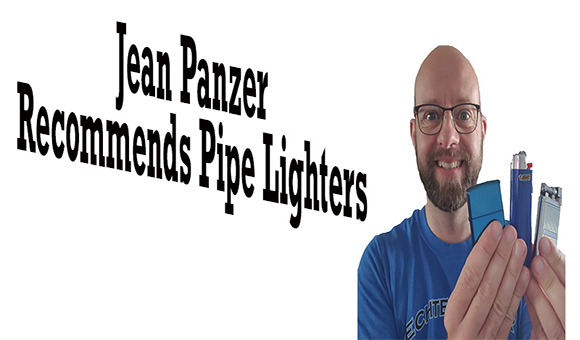 When it comes to lighters, you may also wonder if you may even need more than one. So let’s take a look at what is available and I’ll help you pick out the right pipe lighter for you.

The Bic lighter, which is not really a pipe lighter per se, but it is an inexpensive lighter that is easy to get. Many places carry Bics including convenience stores and gas stations. They are single use, meaning disposable, but there are some models that are refillable.

The trick to using a Bic style lighter with a pipe is learning how to hold it. The lighter will need to be inverted so burning your thumb as you hold down the gas button can be a real problem. With a little practice this won’t be a problem, but it’s not something you will want to forget!

It’s not a fancy lighter or very sharp looking but you can go on eBay or etsy and find some very nice handmade leather pouches or sleeves that you can keep your lighter in. They are cheap and the different styles are endless. It can turn that disposable lighter into a nice accessory for your pipe.

There are also some inexpensive lighters similar to the Bic that have a directional flame. You can angle the flame which makes it much easier to use with a pipe. This feature makes it very functional and a great, cost effective way to start out. Seasoned pipe smokers also love these lighters because of their price it’s easy to purchase many of them and have them place all around where you might smoke your pipe. Especially in the car or carry with you when you go out. If the lighter is lost you are not out very much money and you have plenty more.

Considering your first pipe is not going to be a real expensive one, maybe a corn cob pipe or a basket pipe, getting an expensive lighter to go along with it might be out of place. You really don’t need a fancy gold lighter to go with your first cob. Especially when you are still deciding if you like it or not. You may end up deciding in a few days, weeks or months that this is not your thing and you don’t want to have a lot invested at that point.

The standard insert you get with any Zippo is fine to use with your pipe but they also make a special insert designed just for pipes. The Chimney has a hole in the middle that allows you to hold it directly over the bowl. Being able to control the flame above the tobacco prevents you from scorching the rim of the pipe bowl.

There are also different inserts available, including a butane insert. If you don’t like the odor or taste of the Zippo fuel which some people are sensitive to this is a great alternative. It doesn’t work as well outside in the wind like the regular fuel Zippo does but it is a nice option. Fill it with your favorite butane and you have a great pipe lighter with a soft flame.

Zippos is also a cost effective lighter. You can get most models for around thirty bucks and they are available in many places, online and in retail stores. A solid number two on my list and a must have for any pipe smoker.

I’m using the name “Old Boy” to cover any of the Pipe Lighters of this style. There are a few companies that make this style lighter. The original was designed in 1919 by Wise and Greenwood who worked for the Dunhill company. The design was called the “Wick Cap”. Dunhill began production in 1923 under various names like Dunhill Unique and Tall Boy. All using the wick cap design.

Currently, I M Corona makes lighters of this design, their name for it is the Old Boy. The quality of the lighters coming out of their factory is second to none. It also has a price tag to match. It is an excellent lighter and perfect for pipe smoking.

Other companies are currently producing Old Boy “style” lighters. Peterson has a branded version in the same price range as I M Corona.

Although you will compromise a little bit on quality you can have the advantages of an Old Boy lighter at a cheaper price.

An excellent alternative to the Old Boy is the Kiribi lighter. The quality of the lighters is right up there with I.M. Corona but at a much cheaper price. They are beautiful and elegant while being very practical for a pipe smoker. The soft flame is perfect for briar pipes.

They come in several finishes including the chrome accents as pictured above. They also come in a slim design and shorter versions that are perfect if you carry your lighter in a pocket.

The Pipe Nook carries a complete line of Kiribi Lighters. If you’re looking for a lighter that really stands out, take a look at these excellent lighters.

One of the best balances between price and quality is Kiribi’s version. Excellent quality with a price point between the I M Corona version and the Xikar version. The lighter comes in a handful of styles and finishes and is an excellent choice for pipe smokers.

Xikar makes a lighter called the Pipeline Lighter. It has the classic Old Boy look and functionality and comes in at about half the price. Like it’s more famous brother it also comes with a pull-down tamper and pull-out pick. Everything you need.

The Xikar is my personal choice for the beginner wanting this style of lighter. Like the Zippo, Xikar lighters come with a lifetime warranty. For this price it is great and is more inline with someone starting out.

When shopping for a pipe lighter it’s important that you make sure it’s a soft flame lighter, not a torch lighter. Xikar’s XK1 is a soft flame lighter with a piezo ignition. It used to be that piezo lighters would die rather quickly. They had a reputation of only lasting two or three years but with the lifetime warranty I had no problem choosing these lighters and would do so again. The piezo technology has come a long way and they are much more reliable than they used to be. If I have a problem with my lighter, I just send it to Xikar and get a new one.

I love my Xikar lighters.

If you look into other pipe lighters Xikar has to offer there are some bigger, heavier models with a push button

There are many more pipe lighters out there, some with a very high price tag. An S.T. Dupont that comes in around $1,300 is one example. But those are for another article.

For the beginner, stick with one or more of the three mentioned and you can’t go wrong.

Jean Panzer is a weird scientist, pipe and cigar lover and boasts is the YTPC’s biggest child. You can see Jean on his YouTube Channel Jean Panzer or contact him at jean.panzer@googlemail.com