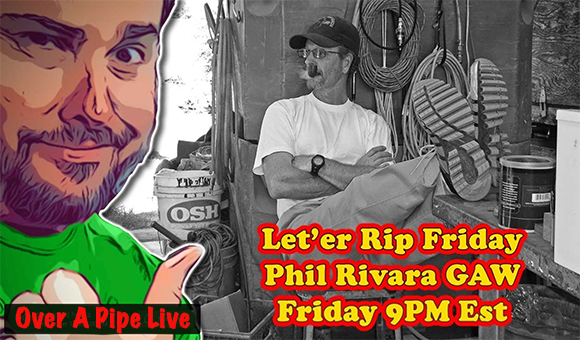 Well done to everyone who participated in Smoke Rings Around the World yesterday. I think it went off pretty well, especially considering it was only the second annual SRATW, at least as far as I can tell. Mr. Armchair Piper did a fantastic job pulling it all together and I’m sure he already has the gears turning in his head for next year.

The other person who stepped up was Martin from Over A Pipe. He hosted the Zoom show that appeared on Over A Pipe Live. Sure there were some glitches, what do you think this was, the Virtual Pipe Club? Stuff like that happens when you are trying out technology that you have never, or almost never, used before. It amounts to growing pains. Not saying it isn’t funny when people take jabs at the guy poking at the buttons, but if you’re honest, if you had to do it yourself, chances are the results would be woeful.

What do you expect when you get a bunch of old guys together? I’ll bet there were some that were waiting on the Over A Pipe Channel wondering when it was going to start.

Blowing smoke rings is kind of hard. Making them look good on camera is even harder. One thing I did notice was that setting yourself up in a good spot makes a huge difference. When you make smoke rings at home and you’re just fooling around, that’s one thing. But when you want them to look good on camera that’s something else.

The guys who were outside were at a huge disadvantage. Nothing you can do about the wind, but if it’s all you got then there is not much you can do. The ones that were inside had much more control and some set themselves up perfectly. Not going to go through and rate or comment on everyone, but just to take one example, Mike from Briar Blues produced some fantastic smoke rings.

Martin commented on his Bluesy looking room, but the dark background and dim lighting turned out to be perfect. The smoke rings were fantastic. Plus he blew them right at the camera which made it look so cool. Other people were blowing good smoke rings but with such a light background or with the bright lights, it was hard to see them. Something to keep in mind if you find yourself in that situation.

OK, enough of that. Onward and upward I say. Tonight is the regular Over A Pipe Show. I won’t say a time because I seem to be getting them wrong lately. Let’s just say it comes on after CaneRod Piper‘s show, which comes on after Glum Chum Piper‘s Show. Not to get off track but congratulations to Mr. Glum Chum and his beautiful fiancée Jen on the announcement of their engagement. Couldn’t be happier for the two of you.

Anyway, tonight is a big night on Over A Pipe because Mr. Phil Rivara has donated to the show one of his own pipes to be given away. You better read that again just to be sure. A Philip Rivara pipe . . . GIVEN AWAY!

Am I going to have to stay up late another night? Earlier in the week I stayed up and only got two hours sleep, then again last night, and am working on only a few hours. Doing that one more night might be the end of me. But it’s a Phil Rivara pipe. All the exclamation points. All the farting and cricket noises. Is it worth it?

Since I’ll probably be dead by Saturday morning, I’ll mention now that Flat Cap Piper will be hosting his usual Game Day Live Show. Not sure how people are doing as far as picking is concerned, but Flat Cap keep track and I think they are doing pretty good. The show comes on after Lady Fire whips up a snack for game day, and this week it’s going to be Cheesy Onion Rings. Sort of a tribute to Smoke Rings Around the World. That show starts at 11 Eastern on Saturday, and Game Day Live comes on right after.

See you all around.