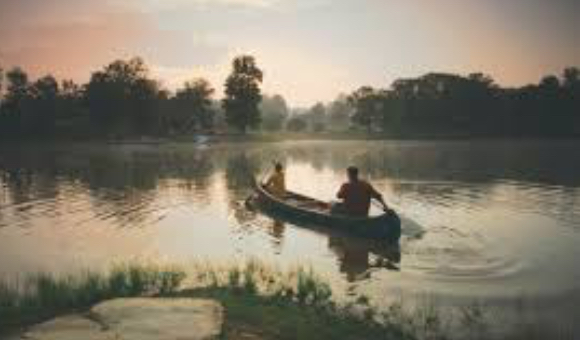 My wife, two sons, and my older son’s girlfriend and I piled into my car and headed west on Route 7 for a respite from the heat and humidity that invaded our corner of Virginia for weeks.

25 minutes later, we made a right turn and traversed down a barely paved road where signs warned us of speed bumps which were actually pot holes. Soon we arrived at Shenandoah University Cool Spring River Campus, a property that saw a bloody battle between Union and Confederate armies – now an oasis of peace and tranquility for visitors to enjoy.

Along a paved walkway one could find narrow well worn trails that led to the water. We chose one and found ourselves on a scrap of land filled with stones.

We spread our blankets out and I lit a corn cob pipe I took along for the day.

Rocks at the river’s bottom made it difficult to wade in and move about. I often crab walked while clenching my pipe taking special care not to drop it in the Shenandoah River.

I settled in among the rocks and felt the warm and strong current surround me as I gently puffed on my pipe. Although I was able to anchor myself using the rocks, my wife worked harder to keep from being carried by the current which ran south to north … a rarity for most rivers.

Strong winds carried wisps of pipe smoke downstream. During brief periods when it died down, smoke from my pipe curled in the air and landed on the water. I dipped my head backward causing my pipe to resemble a periscope.

My older son and his girlfriend splashed in the water. When she and my wife retreated to the river bank, Both older and younger son swam to the other side – a challenging task given the current.

I was content to puff on my pipe in total relaxation turning my head to watch my boys, some canoers upstream, my boys, a fisherman downstream, and my boys again. The goal was to leave with as many that came. They made their way back.

As I continued to enjoy the rushing water and my pipe, my sons skipped stones, and lobbed huge rocks into the water.

A perfect summer’s day drew to an end. My youngest son and I have often returned accompanied by a pipe to enjoy while relaxing in the water. On these journeys, I’ve made it a point to lock my phone in the car so it won’t be stolen. But also because it’s great being disconnected from the world, living in the moment with my family … while enjoying a pipe.