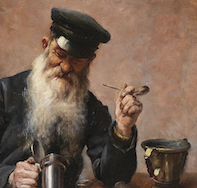 This is a short story that I entered into a contest in 2017. I was trying my hand at writing for some time and thought it might be a good way to bring in some extra cash. I spent the bulk of the year writing short stories and flash fiction and sending them out to various publications to see if anything that I had come up with would get noticed.
Let me tell you, being a pipe smoker during that time was a Godsend. I mean, I wrote dozens of stories at varying lengths and even one novella, (which I thought would be good enough to be published) but to no avail. That is until this story worked its way through the judging.
Around mid-September 2017 I receive a letter from the publishing company holding the contest. This story had made it through the first round of judging and was to move on, now while that might seem like a minor victory, and if my goal had been to win the contest that would be true. One of the rules of this contest is that if your piece makes it to the second round, it’s guaranteed publication in that year’s new short story anthology! Since publication was my goal, anything after that was gravy.
I didn’t place in the contest or even get an honourable mention, but as an aspiring author I had my first true publication credit, and less than six months after starting. I was ecstatic, but the excitement gave way to a feeling of failure when nothing else I had written was ever considered for publication. It took a few bowls of tobacco and some hard thinking to get past this, but in the end, I realized I had accomplished two incredible things. I had managed to become a published author in the course of six months, and I published a story that prominently features pipe smoking in a day and age that considers this a taboo activity.

And now for your enjoyment:

Great-grandpa sits at his kitchen table in the small farmhouse that has been his home for his entire life. He was running a pipe cleaner through his favourite pipe, enjoying the smell of spent pipe tobacco, and pondering the events of his life as he looks at the small child sitting there watching what he is doing.
I wonder what he will be like in the years after I am gone? I wonder if he will carry on some of the traditions of the family with his children? he ponders silently as the boy continues to watch him work meticulously on the stem of his pipe with a pipe cleaner.
His great-grandson is just watching, apparently fascinated with what is going on, but not asking the questions you would expect a seven-year-old to ask. There was no why are you doing that, or how 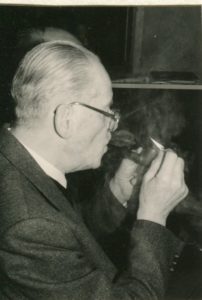 do you know that the pipe is clean? He just sits and watches.
“Grandpa, you put it together crooked. The pieces don’t line up.” said the boy.
Great-grandpa looked down at his pipe. The bulldog’s bowl was attached to a diamond shank that came up to meet the stem. Sure enough, the stem was ever so slightly off centre. Amused he responded to the lad.
“Don’t worry about it, it will still work.”
“Okay.” came the response. That was it. No more questions, no more observations, just acceptance of the fact that great-grandpa knew what he was doing. It was refreshing.
Sooner than he figured, great-grandpa passed away. His years went up in smoke, a good life lived with plenty of family to see him off at the end. The boy was there, a few years older, but didn’t quite understand what was happening.
His dad had told him that great-grandpa was dead and this was the last time he would see him, that they were here to say their goodbyes. The boy understood the words, but the concept of life and death eluded his young mind for the moment. He passed the time with his older cousins, who helped him draw pictures, and kept him busy when time allowed.
Then, the time of mourning passed, and the family went about their lives. Years passed almost like weeks, and one day that boy, now a man went to his grandma’s house and asked a question.
“Do you have any of great-grandpa’s old pipes around?”
“Why, yes I do,” she replied. “Why do you ask?”
He explained that a friend of his had introduced him to pipe smoking and that he wanted to borrow a couple of them to clean up and use. Grandma looked and him for a moment, she thought a bit, and finally answered.
“I consider those pipes to be your father’s, but I know my dad would have lent them to you if you asked. So, if your dad says it’s okay, you can.” Of course, his dad said yes.
He took the pipes home and began to clean and restore those pipes to usable condition. He got to one pipe in particular, the same bulldog that he had sat and watched his great-grandpa clean so many years ago. As he cleaned the pipe, enjoying the smell of the spent tobacco from bygone years, flashes of memory came in loud and clear. He saw from the point of view of a six- or seven-year-old, he remembered watching his great-grandpa slowly and meticulously clean out the various parts of the pipe with a pipe cleaner.
He remembered pointing out how the pipe was not put together properly and getting the response “It will still work.” He sat at his kitchen table in his two-bedroom apartment, which in size was not unlike the kitchen of the farmhouse he sat in decades before. He sat cleaning that same pipe with a pipe cleaner, with the smells of another time around him and thinking about the small child sleeping in the bedroom closest to him. He listened to his son on the monitor for a few moments and smiled at the thought that he may have been thinking some of the same thoughts that his great-grandpa had while cleaning this pipe.
A few short years later, that same little boy, now a man sat down and typed. Great-grandpa sat at his kitchen table…..

Dave Allen, Producer at Maple City Media and host of Maple City Pipecast, you can subscribe to our show on iTunes, Google Podcast, or practically anywhere you get your podcasts. All this and more can be found on our website by following the link below.