My intention was to do a “Best of” column this week, but since I only have two columns so far it was suggested that it might not be a good idea just yet. I thought there was plenty of material to choose from, but I guess I’ll just have to go ahead and write more new stuff.

After last week’s column I see the links for the YouTube stations got fixed. I guess I have more pull around here than people think. It’s no surprise to me since Stogie Report was all my idea.

This week I’d like to talk about what the incredibly stupid government is doing to Servicemen overseas. By the time I read the story it was too late to include last week. Tobacco Business Magazine reported that tobacco companies can no longer send free cigars and pipe tobacco to people serving in the military. Who do these [expletive deleted] think they are? They sit on their fat [expletive deleted] in Washington stuffing their faces with junk food and swilling Starbuck “coffee” while real men and women are serving in hell holes eating MREs. This is outrageous. I haven’t been this mad in a long time. The power has gone to their bloated heads and they just sit there all smug thinking of more ways to screw us. Leave the military alone you [expletive deleted]. I know there are other ways to send the boys some cigars and pipe tobacco but it’s the principle of the matter. It makes me sick.

I’d like to ask the bureaucrats this, if smoking cigars or pipes is so bad for your health, what do you think [expletive deleted] terrorists shooting at you is? You should leave everyone alone but if you can’t make an exception for the fine people serving then you’re worse than I ever imagined.

Pipe tobacco cigars? White Owl, the favorite cigar of old men with not much income and punks who want cigars to “modify”, has come out with just that. Cigars that are packed with pipe tobacco. They are going to be  called Night Owl. Two for a buck and will come in Black Cherry, Classic, 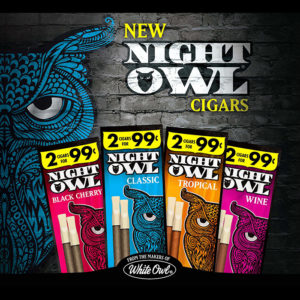 Tropical and Wine. . .Wine?! I’m fully aware we are not talking about cigars with long leaf fillers but I’m wondering what they are calling “pipe tobacco”. When you have to put a plastic tip on the end, it’s usually not a good sign. Two for a buck.

That’s the Swedish Match Co. so they have a little more market leverage than a normal cigar company, being able to power through any deeming regulations that might stand in the way of producing a new cigar. I don’t know what to think about it. On the one hand I’d love to tear into it. My first thought is it’s an abomination to both cigars and pipe tobacco. On the other hand I wonder why I didn’t think of it. I know they will taste twice as good as a two bit cigar, literally, which is not saying much, but that doesn’t stop me from wanting to try one. January 3rd they come out which may be the first, and last, time I have one. I’m not allowed to turn this into a review column but look for me to drop a hint or two. Two for a buck!

Editor’s note; To circumvent the horrendous situation Bill mentions we recommend looking into Cigars For Warriors, an actual 501 (C) 3 Charity that gets donated cigars to the military stationed overseas serving in combat zones. Check them out. 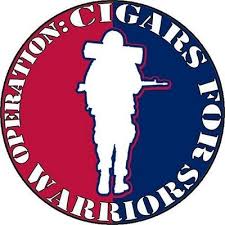