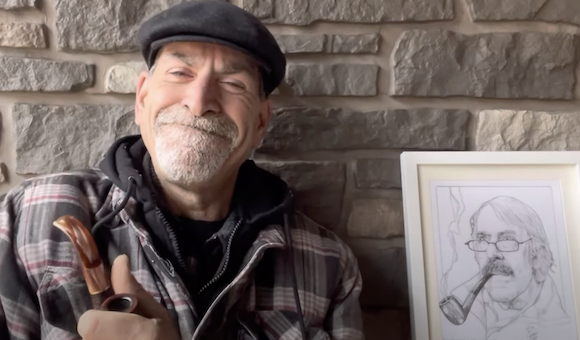 Today is the first day of Advent. You know what that means, I’ve switched from my Autumn blends to my Holiday blends. Not that I really have a rotation, it’s just that I cracked open a tin of Jolly Old Saint Nicholas from Cornell & Diehl. Look, already I’m giving a free link, ‘Tis the Season! Only $10.44 a tin, I had bought a good amount when it first came out and I paid a lot more than that. You can’t beat those holiday deals.

Mr. Spurgeon Piper reviewed the blend last week. I can’t dispute one word of what he said. It was a astute and detailed description of the blend. He may not have been as positive about the blend as I would have, but he did like it. The difference I think might be age. On me, not the tobacco.

As I’ve said many times in the past, as I’ve gotten older, my tastes have mellowed a lot. It doesn’t get much more mellow than Old Saint Nicholas. I remember the first time I ever had it, I thought it tasted like nothing. It was sort of funny. It took 3/4 of the tin before it all clicked for me. All of a sudden all those subtle flavors popped out at me and I loved it.

Because it was Christmas time and because of it’s name, it became my Christmas blend of choice. McClelland’s defined the genre, and that’s just not me saying that, it’s the opinion of a ton of pipe smokers. Christmas Cheer and Holiday Spirit, how can you top those? Figgy Pudding is probably the go to holiday blend if you liked the McClelland blends. Not a match, but much heavier and what people think of when they think “Christmas Blends”.

Wow, I just grabbed the link for that and it’s UNDER $10 for 2 oz. Got to love those sales. If it wasn’t an aromatic I’d buy two pounds of it right now. Don’t know how long The Country Squire has that deal going on, but if you’re interested you better click when you are reading this. It might be over today if you’re reading this on Monday.

Cream of The Crop

Speaking of The Spurgeon Piper, he’s really someone you should follow if you want to learn about pipe smoking and you want a channel that covers a lot. The blend reviews, beginning pipe smoking, interviews. He’s as close as the YTPC is going to get to a renaissance man. There are many channels that have a similar breadth of content, but you might have to go back and search the archives.

Sargent Savinelli put out his annual day-after-Thanksgiving show. He’s done it enough times now that if he skipped it, I would freak out. The holiday season doesn’t officially kick off until I see Sarge. What I might have to do is get some L J Peretti Thanksgiving Day next year so I can join him. That’s a limited blend and it only becomes available on Nov. 1st each year. Need to mark it on my calendar so I’m first in line next year.

Good ol’ Sarge. He doesn’t crank out the videos, but he packs it all into the two or three a year he does. Tons of respect and admiration for the man. Hard working, kind, thoughtful guy. If you want a role model, that’s the guy.

He did announce the birth of his brand new grandson. Congratulations Mr & Mrs Sarge and Mom & Dad too. What a wonderful thing. I couldn’t be happier for him.

The Pipe Nook‘s Black Friday weekend sale is still going on. Don’t forget while most sales end today, he’s going right into Pipe Tuesday which most retailer’s ignore. You watch tomorrow and see if they have anything, I doubt it.

He’s really getting down to the end of some of the more popular pipes. I just checked the availability of some of them. Keeping those exclusive Phoenix pipes in stock has to be rough. They are special order and you never know what the demand will be and don’t want to get stuck with dozens sitting on a shelf. I think it’s safe to say he should have gotten a few more.

The prices on the pipes at The Pipe Nook are fantastic, plus you’re taking another 15% off. And, if you’re on the Secret Santa list, it’s the perfect time to throw a few extra gifts in your cart.

Mr. Giulliano Spitaletti has a show that comes out every two weeks. It’s on Sunday’s at noon, his time, which is 7am Eastern. He will exhibit his new pipes and let you know what’s going on. The next show is on December 5th, and if you’re a regular reader of The Blob, I’ll give you a heads-up. Otherwise, you can always check our Events Calendar to see not only that, but all the shows that are coming up. At least the ones that took the two whole minutes to let me know.

If you want to check out the G. Spitaletti YouTube channel and see what’s going on, just click here.

Actually had a lot more on my list for today, but it’s getting long and I’ll save it for the rest of the week. Sorry once-a-week readers. I’m also getting a warning from the SEO optimizing thing-a-ma-giggy. It says “Word complexity: Is your vocabulary suited for a larger audience?” What did I say to get it flagged? Does mentioning L J Peretti make the pea-brains who run these computer things think I’m snooty?

First of all, things should be more complex. We’ve dumbed things down too far already. If I write a paragraph that’s more than a handful of words, this thing freaks out. Read more Crime and Punishment and less Twitter you lazy bums. And second, I’m happy with the audience I’ve got. I’m going for quality, not quantity.

Lot’s more this week, so be sure to come back tomorrow. I need to get the site numbers up. Oh . . . don’t tell me I need to dumb it down.