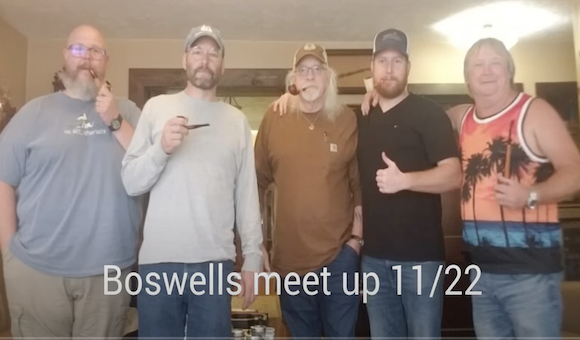 Kevin the JerzPiper is back from Boswell’s in Chambersburg, PA. There was a meet up this past weekend, and Kevin provides a nice roundup of what went on. He had a blast. Other people from the YTPC that showed up included Mr. G- Tunnel Take, J- from JcPipesNKnives, Uncle Willie and Brad the Bearded Piper.

They made a few videos about the day. Besides the video linked above there is also Jerry’s video, and Greg Tunnel’s video that really shows what a Boswell’s experience is all about.

I love it when people take the time to make videos like that. They had a lot of fun being there, but I always like it when I can feel like I can get a good idea of what it’s like to be there. Greg’s video brings back some memories since it’s been so long since I’ve been there. Must be about a dozen years. Can’t even remember.

They are already talking about a Spring Meet-up. Hope they don’t let that fall through the cracks and that more people show up next time.

Last week I got with Mr. Yardism Chad about his “book club“. He did a video this past summer, on July 4th to be exact, we published a list of books that people in the YTPC recommended as a sort of a summer book list. When I went back to look at it yesterday I noticed I couldn’t click on the links! Do you know how much time it took me to make that list?! It was hours. Each book had a link to it that appears to be nothing more than a big waste of my time. The copy of the pdf on my computer works fine, but when it’s posted on the website it unclickable.

I just spent the past twenty minutes trying to fix it, but realized this could be one of those huge rabbit holes. It might take me hours to fix it and then nobody will click on it anyway. Probably because my pdf thing-a-ma-gig doesn’t support automatic link detection. It’s only common sense that I would know that in the first place. Everybody knows that! One of the downsides of using a Mac.

Can you imagine how popular it might have been if it actually worked?

Not going to spend my time trying to fix it. Just chalk it up to experience and not waste my time in the future. If you’re that interested, email me and I’ll send you the original pdf and you can click it yourself. Uuuuugggghhhh!

So overnight Chad pondered expanding the idea. Maybe what we need is an actual Book Club. Not some mushy stupid Oprah book club, but one men would enjoy. He threw out a few ideas for you to ponder and I recommend watching his video and giving it some thought. It could be a ton of fun if they choose the right books and people actually participate. Let Chad know what you think and if it’s something you might be interested in. I think it could be a lot of fun.

By the way, if you watch the video don’t spend the first two minutes trying to figure out which tab on your computer is playing the music so you can shut it off. It’s coming from Chad. Oops.

I haven’t mentioned Artie’s Place and the Daily 5 in a long time. It’s become such a normal part of the morning you tend to not think about it much, it’s always there and you move on. But it’s not fair because he’s always plugging away, always putting out great videos. Even though they are short, it’s probably the best single minute I spend each day. I get more out of Art’s videos, pound-for-pound, than anyone else.

Under appreciated, that’s for sure.

One final thing before I take off for the day. Tobacco, Pipes & Whiskey did a fantastic recap of the Texas Pipe Show. Not exactly on the level of the Vegas Pipe Show, but it looks like the people who went had a great time, and you can’t beat that. Sometimes these smaller, more personal get togethers are just what you need. I wish I were a lot closer so I could attend an event like that.

Glad everyone had so much fun.