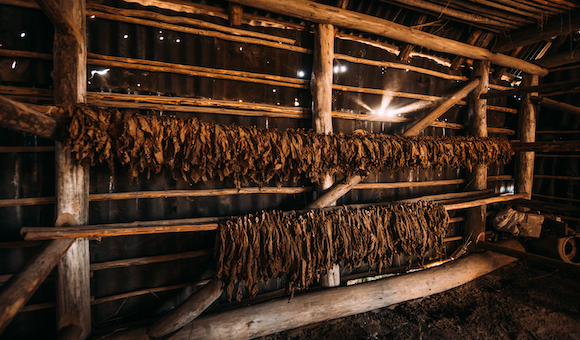 Kasturi and Kasturi are both tobacco leaves used in the blending of pipe tobacco, but they are very different. Neither one is a common component in pipe tobacco, and the similar names sometimes confuse people. Katerini is grown in Katerini, Greece and is an Oriental tobacco. The plant is quite small and delicate, derived from Samsun seeds originating in Turkey.

Kasturi on the other hand, is a filler tobacco used in the production of cigars and primarily used to blend clove cigarettes. Kasturi is sometimes referred to as Fenugreek, which has other uses including herbal remedies, and is used in cooking. This is not the same as Kasturi tobacco.

Blends like Mad Fiddler Flake use Kasturi leaf which gives the blend a delicate spicy flavor. Other blends that use Kasturi include C&D’s recent Folklore, Awakened Elder (The Old Ones), and Visions of Celephaïs. Katerini is also used in Bijou and Innsmouth pipe tobacco blends, at least it has in the past. Oriental tobacco are getting harder to obtain and the supply is dwindling.

The question becomes whether or not they are using the actual Kasturi tobacco leaf, or a derivative of the popular spice. On the Tobaccopipes.com website they state; “The Katsuri leaf is a unique aspect of Folklore’s flavor. Katsuri is seldom used in pipe tobacco mixtures—the Indonesian leaf, also called Fenugreek, is more commonly associated with its culinary uses and its inclusion in Clove Cigarettes as a spice.“

The spice used as an additive is not the same as the tobacco plant that is used to smoke. Smokingpipe’s own description of the C & D blend Folklore infers that they are talking about the Kasturi filler tobacco, but careful reading doesn’t make it clear. They never use the term Fenugreek.

Fenugreek is Trigonella foenum-graecum from the family Fabaceae. Whereas, tobacco plants are in the Solanaceae family.

Comparing the two plants, one can immediately see the difference.

This is an image of the Kasturi tobacco plant. Very short with broad leaves. This is the tobacco that is cured and used as fillers. On the other hand, the plant where Fenugreek comes from is much different.

This plant they take the seeds and grind them up into a fine powder and is used in such things as cooking, Chinese medicine, and even soap and shampoo. Confusion comes when the term Fenugreek is used when speaking about Kasturi tobacco. If one is talking about a spice additive, they are talking about this second plant. If they are referring to a tobacco leaf, they mean the first one. The one grown in East Java in Indonesia.

Katerini is a much rarer leaf. Being an Oriental, which is usually considered a tobacco grown around the Balken rim, has been hard to obtain. Production of this tobacco has been limited in the last ten to fifteen years and has been used sparingly. Many remember McClellands using it in their Katerini Classic (Grand Orientials). Some speculate the disappearance of the Oriental tobaccos being one of the factors in McClelland’s closing its doors.

While it may not be true, the loss of those tobaccos did make it impossible to reproduce many of their popular blends.

Katerini has a higher than normal level of nicotine than other Orientals which are often low. The advantage of the Orientals is that they are a full bodied in the strength department without rising to the level of Perique. When cured correctly they can be relatively mellow, without sacrificing flavor. This is an essential characteristic for a tobacco blender who doesn’t want to, or is unable to use toppings. Fans of English blend tobaccos know exactly what I’m talking about.

Sutliff tobacco has begun fermenting the Katerini leaf in the same way Perique is. The strength produces a lighter taste than regular Perique and adds a little bit of a fruity taste to it.

Tobaccopipes.com has an excellent article on the subject. The blends that have this Katerini fermented tobacco are the ones in the Birds of A Feather series.

It’s hard not to get confused when you are talking about Katerini and Kasturi at the same time. As far as pipe and cigar smokers are concerned, the Kasturi seems to be more relevant. It is in more blends, which is few.

Master blenders like Jeremy Reeves are the actual experts on subjects like these, and he is adept in using the various tobaccos to create some of the most spectacular pipe tobacco blends in the world.

As far as the casual pipe smoker is concerned, Katerini is an Oriental tobacco from Greece and Kasturi is from Indonesia and is used as a filler leaf and in such things as clove cigarettes.