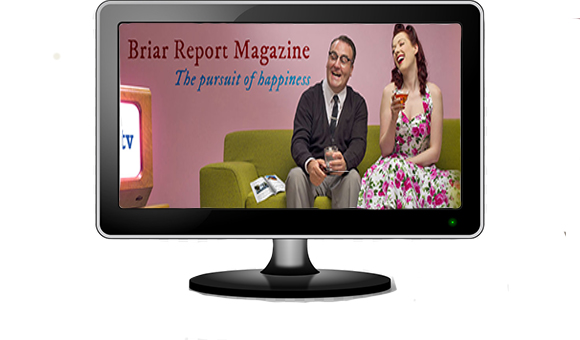 Almost didn’t get this out. Last night, just before the enasdad show came on, while I was editing an article that had just been submitted, the Briar Report Main Frame began to make a ghastly noise. It was the sound of a fan wizzing away. The thing is, I didn’t think it had a fan. All Briar Report material, once ready for digital form is done on a MacBook Pro.

I quickly looked up what was going on since the speed of the contraption was barely creeping at that point and I needed an answer quick. Apparently it was thinking too hard. I wouldn’t know what that feels like. It seems that there was some Adobe thing I’ve also never heard of using up all the CPUs. It was a helper or a renderer, or something like that. I’ve said it a zillion times, I really hate computers. A necessary evil at this point, but that doesn’t mean I have to like them.

Lights On, For Now

The reason I mention it is because if Briar Report goes dark you know I will be here smashing this hunk of junk. It’s actually a nice little gizmo, but if it breaks I would have no idea what to do. Wouldn’t even know where to go to get it fixed. It’s the only way I can update the sites. I don’t even know the passwords, and there’s a whole bunch of them now that we have a new security system.

Passwords are a mile long string of gibberish. Somehow the computer knows them, and it knows me by my fingerprint. It does all the work. If I had to somehow get on the site by myself, I’m done. I should have a back up plan, but of course, I don’t. If the site were down for a week I might as well toss in the towel, all the readers would scatter and probably never come back. There would be no point.

So what was I editing? A new article by Mr. Adam ‘Get Piped’ Floyd. When I say editing, I mean just reading. He really went over the top on this one. A great read for sure. It’s not a pipe tobacco review in the sense that I’m used to reading, it’s a real deep dive into his thoughts on a particular blend. You’re thinking, but that’s a review? Sort of, you have to read it. It’s structured, but also a flow of thought piece. The best part is his “rating scale”, I love it.

Going to publish it on Monday, so watch out for it.

Didn’t get to watch Robert live as the machine was shutdown and cooling off. I wouldn’t have been able to stream a video anyway, way too slow. Probably sitting on the sunny porch with Karen. In a rocking chair smoking something great. I hope he kept the sun off Karen, the sun frays her hair.

He’s going to be moving his start time on Thursday nights to 8:30 pm Eastern (from 7:30). So they will be on a bit later than usual, but it might be better for the West Coast viewers. Starting the week after next.

Has anyone noticed the videos Old Hollywood Briar has been putting up the last few days? I think it has something to do with a new (at least to me) format. They are short. Real short, like 5 seconds. He’s such a creative guy, all he needs is 5 seconds to create something so cool. I have a feeling he’s experimenting a little bit. Also put up some normal videos in the last few weeks. I know it’s not fair to the regular guy who is setting up his phone and sits in front of it smoking his pipe, but Old Hollywood Briar is just on a whole other level. It’s not fair because he’s a professional, but his eye is unbelievable.

If you gave me a camera and put me where he is, then gave me all the time in the world, I couldn’t come up with what he does naturally. I’m mesmerized by his videos, for not only the visual aspect but the sound, the background, everything. The fact that he does great tobacco reviews is the cherry on top.