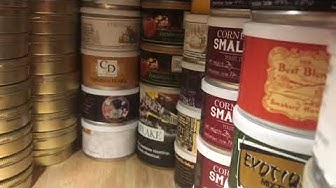 Tater-head is selling off part of his tobacco sellar. A great way to kick start a pipe tobacco cellar or to enhance the one you already have. In fact, it’s so much tobacco that you would have yourself an instant cellar if you don’t already have one.

There is just way too much stuff to list them all here. If you want to see what is included, you’ll have to watch the video and take some notes. It’s that much stuff!

Some of the tobacco included are:

Right now (before April 20th) Tater-head would like to sell it as an entire lot. All you have to do is send him an email at justentaylor@rocketmail.com and make him an offer.

This is a massive amount of tobacco and all serious offers will be considered.

If it goes past the 20th and no offer is accepted, then he will consider breaking up the group.