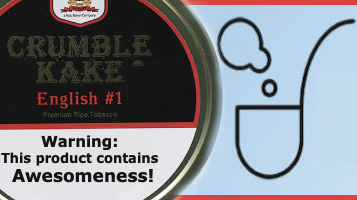 Sutliff’s Virtual Pipe club has begun and they have kicked it off with a blend that is very good, but not usually on people’s radar. Crumble Kake English #1.

It just so happens that the word is getting out about Sutliff’s Crumble Kake, and even John Lofland has put it on his top 5 list of blends so far in 2019.

See what John has to say about it here.

In preparation for the first Virtual Pipe Club, we at the Briar Report’s Saturday Staff Meeting took time out to smoke this blend. Although we never, or almost never, do any reviews, we wanted to share our thoughts with you.

The first thing we noticed was that even though it is a crumble Kake, it is sliced. We are used to the small plug type brick that is typical of a Crumble Kake. It was nice that it was sliced especially since it made the preparation that much easier.

It smells so nice, just like a pipe tobacco should. Being an English it is not covered in goopiness, not that it’s even fair to make the comparison to heavily topped tobaccos (I’m looking at you Molto Dolce).

It has a great mix of Burley, Virginia, Oriental and Latakia. I knew it was going to be something we liked because not only does it have Virginias but Red Virginias, and Orientals. The amount of Latakia is perfect. I know the blend features Burley but it doesn’t push the other tobaccos aside. You can tell whoever came up with this blend spent some time and got the balance just right.

Some people have described the blend as being “thick”, we did not find that the case. It was not as light as compared to a Va/Per but not real thick as you get when the blend starts to get heavy with the Latakia. In fact, this blend might be more balanced that a lot of the newer English blends that seem to be moving towards that crossover style, where they might even be flirting with becoming an aromatic.

We are not going to give it a rating, but of the three of us, we are unanimous with the thumbs up. If this is how they are going to start the Virtual Pipe Club off, they have set the bar pretty high.

Some Other Reviews From Club Members

One of the recent reviews for the Virtual Pipe Club comes from Mr. Randy Tuggle. He posted his review on Tobacco Reviews.

“This blend is absolutely remarkable. A perfect mixture of Burley and red Virginias . . .”