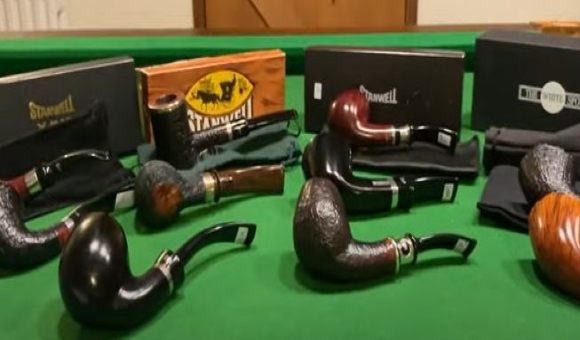 I didn’t put the information about London Calling with Simon’s Summer Sale because I’m usually about a day behind. Not really behind, it’s just that I write most of these the afternoon before so if something comes out later it doesn’t make it in that night (which would be the next day), but you would see it two days after. Does that make sense?

Well, Simon is having a Blow Out Summer Vacation Sale. Can’t beat that. He’s got a whole bunch of fantastic pipes including Stanwell and even White Spot. Watch the video where he goes through what he has. If you’re interested I hope there are still some left, I’m sure they will go fast. I wish I would have put this in yesterday.

Stuff & Things Bradley has been tip-toeing around the YouTube rules lately. I totally respect what he’s trying to do. He is one of the guys that wants to monetize his videos. They aren’t all about pipe smoking and he can make a few bucks if he plays his cards right. I also know that everyone has a different audience. Some people, especially the ones that play video games attract younger people so they have to be super careful about their age restricted videos.

One thing he mentioned was that he blocks out the video of him actually lighting his pipe. He calls it a “p” so as not to trip any land mines. He says YouTube flags his videos because the computer can tell he’s lighting a pipe. Do other people find this as dystopian as I do?

I respect what people do on their own videos and would never criticize them, but for me, I could never act like that. I guess if you want to play on their playground you have to follow their rules, but I just couldn’t do it. Not that I would have to worry about kids and underage viewers. I’m a grown man so I don’t play video games, nor do I want to socialize with kids.

As some of you know I have a couple simple rules when it comes to my content, the first is be a gentleman. I’m not going to get all foul mouthed or anything like that. Nothing I would be ashamed of. But I like smoking my pipe and if people don’t like it, well too bad. I’m not doing anything wrong. I have it good because I’m on my own platform. If I needed to I could embed my own videos and not even use YouTube if I wanted (no, I don’t want to). My point here is I think it will only get worse.

Once people get a taste of the power they have over others, they will never give it up. In fact, they only want to expand it. The type of people who think anything they do, no matter how sick or perverted, is fine. But anything they don’t like is off limits. Not only do you need to do as they do, you need to think as they think. It’s sick.

I know I go off on this every once in awhile, but I feel bad for Bradley. He is no where near as radical as I am. He’s pretty tame and laid back. Little bit of a hipster vibe going on, but other than that he does great reviews and lots of people like him. Now he’s got to put up a silly cutout of his face to block out the “offensive” content. It’s just not right.

Tonight is National Mafia Live! Is John back yet? I can’t wait to hear more about his trip. Willie has been doing a pretty good job soloing. Worth you time, for sure.

At the end of the Smoking The Late Night Briar on the All Briar’d Up channel, Jon talked about being more consistent with the times he comes on for the live shows. You can usually catch him late at night, Eastern Time, talking about anything under the Sun, especially tobacco blending and pipes. If you haven’t watched yet, think about stopping in one night.