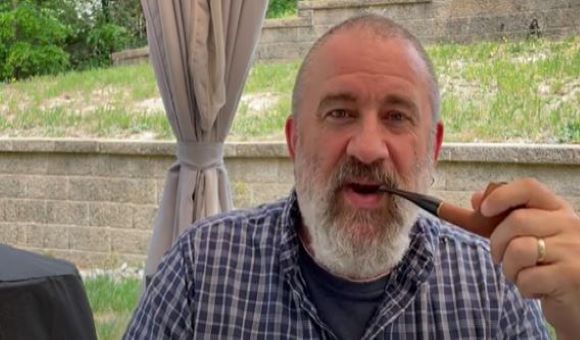 Stop the presses. I just got word that the latest Asikyan Pipes that arrived at the Briar Blues compound will be up on the website today. By the time you read this there is a good chance the page will be updated, so you can be among the first to choose. Pick of the litter, so to speak.

I’m going to give you the link, but it might not work if you’re not an insider (like high power wheeler-dealers like me). Worst case, it will ask you to sign up, but you should do that anyway. If the Asikyan pipes haven’t been posted yet, you can browse through the Kaywoodies that are up. Boy, Kaywoodie does those classic shapes right. No wonder they have been so popular for so long.

If you happened to be around yesterday afternoon you might have caught Eddie Gray doing a Pipe Nook Live show around noon Eastern. About 30 people showed up which is pretty good for a spontaneous live in the middle of the day.

He verified that he’s already sold out of a couple of the Phoenix pipe shapes and only has a couple of another. There are still pipes available but your choices are limited. He did say that a reorder has already been put in, so that’s good news if you had your heart set on one that is sold out.

The biggest topic was tobacco, specifically opened tins of tobacco. I might have been Piper Cid-Said who said he currently has 200 opened tins. That’s impressive. I think he’s counting tins he opens and then jars immediately. Not sure what his system is, but that’s a lot of tins. Good for him.

Eddie mentioned that he can keep a tin open for about a month before he has to worry. Where I live, and where I have my tobacco pantry, a month would be fatal. All I would have is tobacco dust after a month. I try to only have two or three tins open at once, and even those need to be in a better container than the original tin.

You would think the humidity would be fine where I live by the lake in the North East, but that’s the problem. It’s a little too high, so I have to run a dehumidifier. Keep in mind I have extremely delicate tools and equipment that couldn’t stand up to any corrosion. NONE. Therefore it’s easier to take care of the tobacco than to try to replace tools that were made 100 years ago.

Tonight Robert begins at his new time 8:30 pm Eastern for the Thursday Night with Robert show on enasdad channel. Did he say he was going camping this week? Karen loves camping, as long as they don’t put her too close to the campfire. Plastic parts and all.

I’ll leave you with something to think about today. Parsimonious Piper made a video talking about quality. How the engineering and the wood grain play a part, and to what degree does each play as far as importance. I could make a case for either. Hear what he has to say.

I will say that when you have both is really the ideal. When everything comes together to make a spectacular pipe. I love some of the rustications, but a smooth finish is the only way to know if you have the complete package.

The video was so good, I might just watch it again.