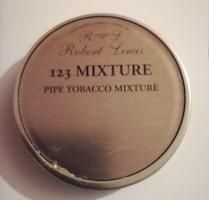 The festive season is finally over and us pipe smokers can once again start buying tobacco for ourselves. We don’t have to smoke the terribly mild “Christmas” blends gifted to us by well meaning but clueless relatives. You know the stuff, gloopy mixes with far too much alcohol flavouring. Blends that are so sticky you can pinch some between your fingers on Christmas Eve and it’s still stuck together on New Years Day. It produces loads of smoke and absolutely no flavour whatsoever. Your tongue is cooked perfectly and you have to smile and pretend it’s the best thing since fire was discovered. Well now that our relatives have gone home and the sticky stuff has been banished to a jar or possibly the nearest bin it’s time to get something in our briar, meerchaum or corncob that will delight our taste buds, instead of cooking them.

I’ve found something that has definitely tickled my taste buds and that is Robert Lewis 123 Mixture. I was perusing the online tobacco retailer that I use and decided I wanted something different to my usual blends so I went straight past Peterson and came to Robert Lewis.

It is listed as a ribbon cut but when you actually have a good look it seems to me to be a coarse cut. There’s twiggy bits and fine ribbons but it is not uniform all over the tin. That said it still packs well and there is no bother getting it lit or keeping it lit.

Tobacco Reviews.com says “Robert Lewis 123 is a delightful mixture containing the taste and aroma of a fine Cuban cigar.” I have to agree with every word of that sentence. It tastes great but I’ll get to that in a moment.

When you first crack open the tin, shove your nose in and take a whiff all you can smell is the Latakia. However that only lasts for the first couple of sniffs. After the Latakia has assaulted your nasal system the aroma calms down and you get the Virginia making itself felt a little more. Keep at it and you can just about make out the cigar leaf.

As I mentioned earlier packing is not a problem. There are no major worries there and it’s perfectly fine to smoke straight out of the tin. No drying time required. In fact, you might want to decant it into a jar pretty quickly so it doesn’t dry out any more. For my pipe smoking friends who live in warmer and dryer climates than me it will be a necessity.

Where this blend really shines though is in the taste. Which is why we indulge ourselves in this wonderful hobby in the first place after all. I’ve been smoking this blend for a couple of days now in a variety of different pipes. I can say that it definitely prefers a taller chimney style bowl than a squat wider bowl. You will not get the most out of this blend in say a bulldog.

After the charring light you can really taste the Latakia but as with the aroma it doesn’t last. The further down the bowl you go the different constituents seem to take over. Only for a short while then backs off like good team players let someone else take over for a bit.

One word that will instantly come to mind when smoking this blend is smooth. Another is creamy. The cigar leaf is definitely there but subtly. It doesn’t scream at you but it does show its face from time to time especially in the retrohale. The Cavendish melds the flavours together nicely and the Virginia keeps everyone else in check whilst also working in the background. To give you just the right amount of the usual hay like taste to make the smoke a little more nuanced. There is also a nice aftertaste that I wasn’t expecting too. If you are after a powerhouse with a lot of nicotine then you are not going to get that here. Probably a mild to medium in strength, but what you will get is a fantastic full bodied English smoke. It will surely satisfy your needs in these long winter nights.

Will I recommend this tobacco to anyone else? Absolutely. Not only that but I will be putting it on my monthly rotation. This blend is one I really loved and I hope you do as well.

I hope you enjoyed reading this review as much as I did writing it. In the near future the plan is to have a couple more reviews for you. Hope you like them as well.