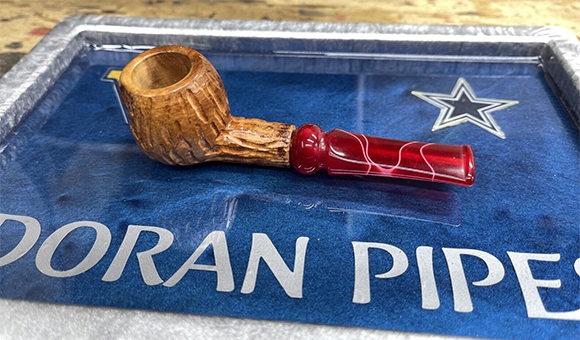 Welcome once-a-week Blob readers and regulars. Can you even believe November is half over already? I can’t. Maybe because I’m back on a somewhat normal schedule and trying to shred through this backlog, time is really flying. It’s only a week and a half until Thanksgiving. No screwing around this year, if I don’t get things done it will be 2023 before you know it.

In the newsletter today we mentioned the pipes Beans316 (Doran Pipes) has up at eBay. If you don’t know, he’s listed under “briarguy” on that website. It’s hard to search for just a certain seller, even if you know the name, the search feature isn’t the greatest. Here is a link to the “store” page he has up. I used to have a eBay affiliate account, but nobody ever clicked on it and I spent so much time picking out nice pipes to highlight instead of linking to a general page. What a sap I was.

I shouldn’t say that. You never know what will work and what won’t unless you try. I shotgun a lot of stuff just to see if it’s what people want. One thing I have learned, and it can be a lesson to any of you content creators out there. Don’t go by what people say, go by what they do. People are quick to tell you what would be great content and what you should do. They, of course, usually don’t understand all of the work that goes into some of this stuff, but that’s not their fault. But it’s not their time or money. After all that, it usually results in laying a big egg.

What you need to look at is what people click on. See where they actually spend their own time and money. That’s what matters. They vote with their wallets, or their time in this case.

So, that isn’t an affiliate link up there. No cake coming my way if you buy one of those pipes. If you watch the Beans316 channel, you can find out a whole lot more about the pipes. Even on his Community Page he has a blurb and photos posted. I love these type of pipes which I call Shop Pipes. I’m not going to put them on a nice pipe rack, but I can’t live without them.

When your down on your luck and you’ve lost all your dreams there’s nothing like a campfire and a can of beans.

Not always sitting in a nice comfy chair with a pile of wooden matches and some pipe cleaners. Sometimes I’m outside on the tractor or sitting on the rocks at the lake. Not going to take along one of my prized pipes.

Reminds me of a pipe I got from Professor Walker. I wanted one of his really nice pipes, but told him to send along another when he shipped it. I wanted a real beater. Something I can toss up on the bench and not worry about it. Have a feeling he thought I was joking, but he sent me a pipe he was having a problem with and patched the side of the bowl with some kind of putty. EXACTLY what I wanted. I smoke that pipe all the time, if it blows through, I’ll just glob something in the hole and keep on going.

Now, I’m not saying the pipes Beans has are on that level. They are much nicer. He took some stummels that were seconds and put stems on them. He says the stems are not removable, but that they each pass a pipe cleaner with no problem.

I had planned to put in the newsletter that Figgy Pudding and Cordial Friends are available at The Country Squire. It was in the Blob a few days back, but I wanted to get it in the newsletter since that reaches many more people. And, of course, I forgot. Too many notes. I try to keep them all corralled in my planner, but that doesn’t always happen. My fault.

If anyone gets some and does a review, I’ll feature it on the website. I would do it myself but I loaded up on Jolly Old St. Nick, and I have it coming out of my ears. This year has to be focused on that blend, and next year can get back to normal.

Let me tell you how screwed up I am. My normal tobaccos which are non-aromatics, can be cellared with no problems. But when I get an aromatic, I want to smoke it up. Just buy enough for the season and be done with it. They don’t cellar as well, and after a year they lose their pizazz. Better to buy fresh the year you’re going to smoke it. This year I got some Autumn Evening. Not much, only about eight ounces. Enough to supplement my normal smoking and enjoy a little Fall blend.

My two weeks of intense work turned into almost a month. I was only smoking about one pipe a day and that was usually while driving. Now I still have at least half of it left, and lucky for me I have all the way to December 21st to get through it. I’m not going to smoke it past that.

The problem comes in when my plans were to switch over to St. Nick on the first day of Advent. Had it all planned out. Well Advent starts in two and a half weeks. I’m going to have to smoke more than one bowl a day to get through that. Since I’m not really an aromatic smoker, if I go overboard I’ll end up hating the blend. I want to enjoy it, then look forward to it next year. Shouldn’t have gotten so much, but it’s too late now.

Am I going to have a love/hate relationship with it now? Am I going to have to have Dr. Rockwood solve all of my problems? I’ve got about six other tins open and I wanted to start the new year fresh. I’ll make it, but it will take some work.

Been working on new plans for the Blob, and the website in general. Hoping to expand my horizons. One of these years I’m going to have an idea that will actually work. And when it happens, you’ll be able to say “I used to read that guy way back when he was a little more sucky than he is now.”

Open the newsletter when it comes and be sure to tell your friends about the best pipe and cigar website in the world.