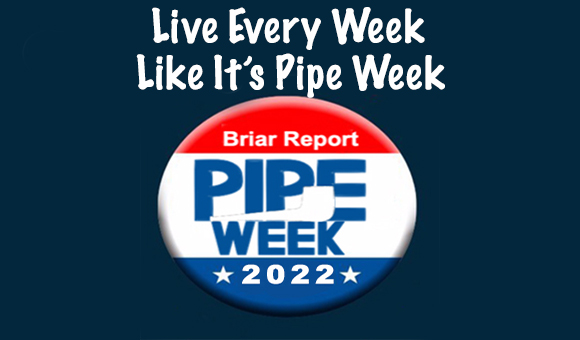 It’s actually Pipe Week Eve as this goes out, but we wanted to get a jump on the best week of the year, starting Sunday, June 19th. We first want to wish all the Dads a very happy Father’s Day. Especially new dads like Mr. John David Cole and Mr. Eric the Blue Collar PIpe smoker. Even more important that Pipe Week, more important than just about anything else is raising your kids to be wonderful people. Here’s to you, dads.

As Pipe Week grows, more and more retailers are offering specials so you can get into the spirit of things, and hopefully get yourself a new pipe or anything that goes along with that. The last Blob has information for The Pipe Nook who is having a week long special and The Country Squire, who is starting it off with a Father’s Day sale.

Today we want to share with you the deal Briar Blues is offering. Starting Sunday you can get a 10% savings, across the board, on any pipes on the Briar Blues website. Use code PipeWeek at checkout. Usually when I mention Briar Blues I recommend going to the Latest Arrivals page first. It’s what I do. But for Pipe Week I usually head right for that pipe I’ve had my eye on, but haven’t gotten for one reason or another. This is the time to get that pipe you always wanted. If you’re only going to buy a good pipe once or twice a year, this is it. If you’ve been saying I’m going to get me one of those Asikyan Pipes, or there is that one pipe that would really be at home in your collection, take advantage of the sale and put it on your rack.

I should have seen it coming a mile away. All the bugs in our calendar had been worked out and we were rolling along. But now many of the features are not working. They want me to “upgrade”. The thing is I keep upgrading all the time. I’ve sent the company that develops the application all my subscription fees, and more, and for some reason it’s not up to date. I’m starting to get really mad. Of course it has to be right before Pipe Week.

We wanted to feature the Codger Week Special that Paladin Piper is doing. It is the perfect way to kick off Pipe Week. In fact, I wanted to watch the show live myself, but now I won’t be able to. June 19th (Sunday) at 7:30 Eastern. If you can be there, I envy you, the Codger Hours are fantastic.

Enasdad was unable to do the Thursday show, and switched it to 8 pm Saturday night. That’s tonight if you read this when it first comes out. Curmudgeon Piper did a quick fill-in live to cover for Robert and mentioned that he might go live this Sunday. He gets a pretty good crowd when he pops up unannounced, so if you’re watching out for him it might be a good crowd. Be sure to subscribe and hit the notification.

Last year we started to do a Pipe Week Awards Show. It wasn’t to compete with the Official Pipe Community Awards that are given out by The Country Squire. It was done to just have something fun for Pipe Week. How some things happen, Flat Cap Piper & Lady Fire hosted that show and took it so far over the top that it now became “a thing”. I don’t think it would have become what it is if it wasn’t for those two. The thing is they were unable to host the show this year. Lucky for us, Peter Piper NYC agreed to step up and produce the show this year. It was a stroke of good fortune since I have zero technical skills. Here is a link to his trailer for the show. Give you a good idea of the quality the show is going to be. Next Saturday, June 25th at 7 pm Eastern on the Peter Piper NYC channel.

We started off The Blob talking about Briar Blues, so lets end with one from the Briar Blues YouTube Channel. He put out a video about Pipe Week. He also updates the drawing for the new Asikyan pipes that are being given away. Be sure to check it out.