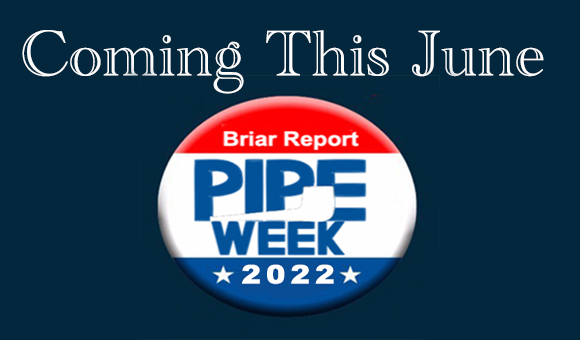 Actually, we began Pipe Week preparations last year the day after Pipe Week 2021 ended. Then forgot about it the day after that! Not exactly true, but close. There are some events that have been in the works. First and foremost, the Pipe Week Awards which are underway. It won’t be exactly like last year but it will be fun, I hope. Lots of nominations and all great channels with great content. I don’t envy the judges.

There is going to be at least one dedicated give away, run by Picking & Piping. Look for details on that in the coming weeks. As special sales and events come in we will tip you off. It’s an opportunity for some wonderful content for pipe smokers who are looking for something to do. Don’t forget the tag line is “It’s all about the Pipe”. So getting a new pipe to share or a special pipe you want to just show off or teach people about is perfect. Start giving it some thought so you are ready to go.

Less Than One Month Away

Pipe Week 2022 officially kicks off on June 19th and runs through to the 25th. Every year it has gotten bigger and better. One of these years it’s really going to take off. I’m so excited.

The “real” test is what google thinks pipe week means. When you put it into the search engine, we come up at number 24. How depressing. Concrete Pipe Week takes the first 23 spots. Who ever knew there was such a clamoring for concrete pipes? We need to totally own that name, but going up against such a big industry it’s going to be hard. Especially since I have a feeling they might be mobbed-up. That might be tough. Do wise guys know much about the internet? Probably more than I think they do. Doesn’t matter, it’s only a matter of time before we move up to number 1.

Usually one of the first channels I check every morning is Yardism. Always fun, but sometimes it makes me go full stop. Too much to think about so early, I kind of brain freeze. What I need to do is wait until all my normal morning things are done, like write this Blob, then check and see what Chad has going. At least I don’t watch the news.

HolySmokinNPipePadre’s May video is out. He makes me want to smoke a pipe and have a peanut butter and jelly sammich.

This year I am not going to link to stories about cigar releases prior to the PCA Trade Show like I have in the past. It is nice to know when sticks like the Warped Desert Eagles are available. The problem with it is this is when so many cigars are released for the show. Then what happens is that there isn’t that much pipe news and the entire news page ends up being full of nothing but cigar releases.

On the one hand, it is news, but on the other I don’t want the news website to be thought of as a cigar page. Maybe I’m making a mistake, but I’m going to take a pass on them this year and see what happens. If you happen to like the stories, let me know, I’m open to including them.

Every once in awhile I like to say thank you to all those making content. Just wanted to say it again. For those making videos, spending valuable time writing blogs, or making podcasts, your work is appreciated. Wish I could watch and read it all. Always entertained, usually learn a lot and am even introduced to interesting things I normally wouldn’t. There are even opinions that I might not agree with, but it doesn’t matter, it still gives me thought.

Of course I have other interests, but I love the pipe content. It isn’t a big community so I always want to promote them when I can. To also make sure they know they are appreciated.