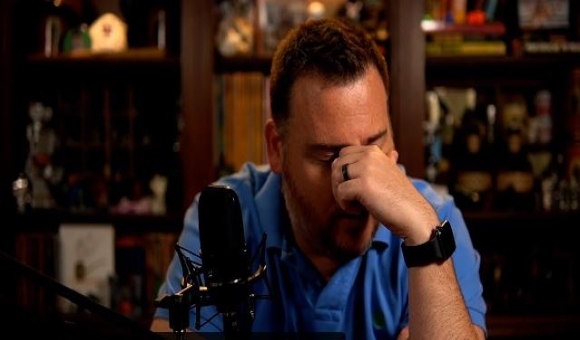 Tonight is the night. The day you’ve all been waiting for. Derek returns on the Over A Pipe Show! Not only that but Martin returns as well. Of course there is already a snag. Martin has been trying to get people subscribed to the new Over A Pipe Live channel which is supposed to be the new home of the live show. But it seems there are some technical difficulties (which is why I didn’t link to it). Don’t want to get you confused, so for now, here is the link to the show tonight. It will be on the regular main Over A Pipe Channel.

So what does Martin have in store for the new season? One can only guess. I imagine more technical problems. People shouting Shot, Shot, Shot. Martin drinking too much, and Exclamation Points that I still don’t understand. Then again, it could be totally different. I hope it goes well for him. Tonight at 9 pm Eastern. Good luck Over A Pipe team and welcome back.

Yesterday I heard from Briar Blues who corresponds with Marzio Radice often, that Marzio’s brother Gianluca is recovering from a heart attack. It’s shocking to hear, but knowing that he’s OK and on the road to recovery, it makes you feel better. Hope he’s back to good health in no time.

With a small business like Radice, loosing just one of the key members can really put a pinch on production. It’s no wonder that inventory has been stressed. If you’re a Radice collector waiting for new drops could take a while. Best to see what’s currently available before it’s snatched up.

I also was in touch with Eddie Gray from The Pipe Nook. When he first released the new Phoenix Pipes they went flying out of the Pipe Nook at record speed. I know, I snagged some for myself. At the time he didn’t know what the turn around time on the restock was going to be because this is an exclusive line and it was just rolled out.

Well, I’m happy to report that those shapes that sold out so quick have been restocked. All except the 05 shape which will hopefully arrive soon. The Phoenix is a 9mm pipe with a very unique finish. It feels great in your hand and smokes wonderfully. Here is a link to the video Eddie made showing the pipes and the different shapes.

There are two things I’d like to mention about The Pipe Nook. If you haven’t been paying attention he’s done a little work under the hood on the website. There are some new features you might not be using. For example, there is a waiting list on each item page as soon as something goes out of stock. So say you have to have the Phoenix 05 shape, maybe because you have all the other shapes, at the bottom of the page where the “add to cart” button normally would be, it has an option to add yourself to a waiting list. When that pipe comes in you will be the first to know.

I used to not pay attention to features like that, but the waiting list they have on Smokingpipes that I use for rarer blends has been a feature I use all the time now. Luckily, it’s just the one shape that he’s waiting on now, all the rest are ready to go.

The other thing I wanted to say was, if you’re not on The Pipe Nook’s mailing list for the newsletter, get over there and sign up. I’m pretty quick out of the gate bringing you the latest news, but even I don’t get the word out on some of the sales and things as quick as the newsletter subscribers get it, although I am a subscriber myself. Just sign up and you can thank me later.

The Kindness of Others

There was some breaking news just as I was going to Press and I didn’t have time to give it the attention it deserves, but I wanted to make sure you knew about the hat that was being passed around. Normally I don’t like the Go Fund Me thing and I’ve stopped publicizing them on this site, but when I heard about this one, it was a no brainer as far as I was concerned.

It seems that Mr. Curmudgeon “Mudge” Piper, the formerly “funniest man in the YTPC” was planning on hitchhiking to the Las Vegas International Pipe Show. When he saw all the fellow YTPC members that were going to attend, he was determined to go. His loving wife did not want him to stand outside with his thumb in the air, hoping for a ride and felt bad for him. So what she did was start a tiny fundraiser to raise enough to get him a ticket on a bus that was heading west.

It was a one of those converted school buses and the ticket was only $20, if you shared your seat with a crate of live chickens. This was perfect and Mudge could be assured of a ride.

Well it turns out they have surpassed that goal and he has enough to ride an actual Grayhound bus! He only has six transfers between Raleigh and Vegas. Even though the goal has been passed, she’s leaving it up for now, so if you might like to toss in a shekel or two and upgrade him even more, here’s the link.

The only thing that we are not sure about is that the Divine Ms. Leigh is sparing no expense to get her grumpy husband to Vegas, but has said nothing about his return trip. In fact, the ticket he got was only one way as far as we can tell. We need to make sure he has a ROUND TRIP ticket so he can get back safe and sound.

As I mentioned earlier, I didn’t have time to put anything together for this story, but I didn’t want to delay it either. Maybe during the weekend I can get out a special edition Blob as more facts come in.