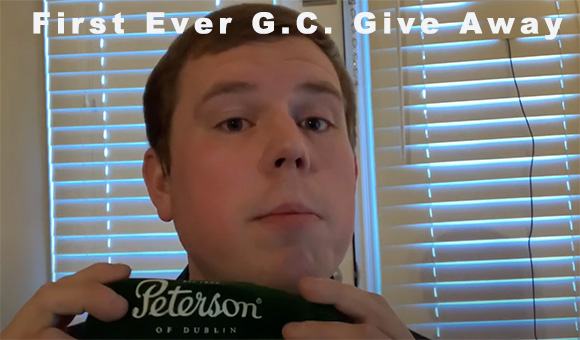 Before I forget, I wanted to find out what you all think about the length of these blob entries. I try to keep them short but don’t mind going long on one or two days each week. There is probably some optimum length, but the average attention span nowadays is about 12 seconds. I’m assuming your typical pipe smoker’s is somewhat longer. Hopefully, but I don’t know what that is.

Even so, I want to tailor it to my audience. The goal is to give you at least one thing you can feel was worth your time, but not to waste any of it.

Let me know, I really value your opinion.

In the past I’ve gotten many emails suggesting things I “should” do with the website. There have been some funny ones, and some really good ideas. It’s been suggested that I have a Classified section. Sounds good and might be useful. The only problem with that is, do I let people be able to post things themselves? If you don’t think that’s a big deal you’ve never been subject to a brute force attack. I worry a little about someone like Bill posting something stupid (he has access and has posted “in persona”). But that’s nothing like worrying if rotten people will break into the backend and attach malware or some kind of code with evil things.

I wouldn’t mind a classifieds section, but I’m not sure how we could make it easy to use for everyone. Plus would someone get mad at me if they got ripped off? I also don’t want anything to do with the sale of pipes since you can get pipes from the people who advertise with us. Look over there —->

There already are tobacco review websites and the data base would be huge. Not opposed to it, but it would have to be much better than anything else out there and I don’t see that happening.

So what do you think? Is there a feature that nobody else has that you would love? It has to be something that we won’t have to rely on others for. Often people promise to write something for the site, but end up not doing it. That’s fine, I don’t get to many things either. So I can’t depend on anyone else. But, I don’t have any extra time either. I’m already writing Blob posts at two in the morning, and I haven’t even started my work day yet. At least not the productive part.

This isn’t a complaint, even though I am complaining. What it’s meant to convey is for something to be successful it has to be planned and executed properly. I’m open to input for the planning part, but I also know I’m getting no help on the execution part. It has to be something that will run itself or something I can squeeze in.

The email should be working. editor@briarreport.com. Let me know your idea. I don’t care how wild it is. In fact, the more outside the box the better. We want to break new ground. Have something nobody else does. Something useful to pipe smokers. Attracting new visitors would be fantastic.

Glum Chum Piper Give Away

Mr. Glum Chum Piper is having his first give away. Here is a link to the video which announces the drawing, lays out the rules and shows the Peterson Pipe that is the prize.

I’m so happy for him since he has gotten 200 + people to subscribe to him already. Pretty quick for the YTPC and he deserves it. You can catch his new live show Friday evenings (today) at 6:30 pm Eastern.

This Is Not An Entry

This is in no way an entry, but maybe I’ll take a stab at Glum Chum’s questions.

The best advice I’ve ever gotten was from me. Once a long time ago I overheard someone talking about me, and I gave myself some good advice.

Being a nuke in the Navy there was always a little disconnect between us and other departments, for whatever reason. Not bad, but just different. Since I was the youngest guy in Engineering, when they were told to send someone forward to work for awhile, I got picked.

That’s when I heard the guy I was going to be working for tell his boss, “I hope he doesn’t just sit around and do nothing, we’re going to have to watch him”. He didn’t know I heard that and I was somewhat offended that he would say this. I made it through nuke school, and more, which is very hard, at least it was for me. Over half the people didn’t make it through the program, who was he to insinuate I’d be a lazy bum? I told myself to not just make sure I work hard and make the Engineering dept. look good, but to work so hard that those jerks would look like the lazy bums in comparison.

After that I was always the first one up working and the last one done. Worked doing my job and theirs. Never stopped. After how ever many weeks it was they told me they couldn’t believe my work ethic, and was the best worker they ever had. I told them it felt like I was on vacation and their job was so easy I was bored.

From that I realized it’s 90% attitude, no matter what you do. Plus proving them wrong felt pretty good. Bums.

The second question was what song effects me the most. That would have to be be Buttons and Bows by Dinah Shore. What a voice!

A runner up would be the complete album Wild Heart by Stevie Nicks. But that is because it has a story behind it. We were going out to sea for quite some time. After we were out for a day or two I realized that while I brought my Walkman™, I had forgotten all my cassette tapes (before CDs). The only thing I had to listen to was what was in the player, that Stevie Nicks tape.

Not exactly what I would have chosen if I could only have one, but there it was. We were out for six months! I must have listened to that tape a thousand times. So much that it effects me now. Here’s the thing, I told that story to many, many people. Then one day I was looking at liner notes, or whatever they call them, for a Stevie Nicks album and they had MY STORY on there. But some [really bad word deleted] stole it. Said it happened to him. That couldn’t have happened to two people so I know it was a giant rip off.

The worst part is Stevie thought enough of the story to put it on her album. Did she contact that guy and talk to him? It should have been me! That [same word deleted] not only got to talk to her, but she thinks of him like she should have thought about me. I could never correct the story because nobody would ever believe me. I got robbed so bad it still eats me to this day. How could someone be so rotten to steal my story? The rat probably believes it by now.

Now when I listen to it I have such mixed feelings. I’ve never felt so cheated, because I’ve never been so cheated. She will never know and the [again, deleted] will never tell the truth. It’s possible it happened to two people but I highly doubt it, plus I had told the story many times so it was out there.