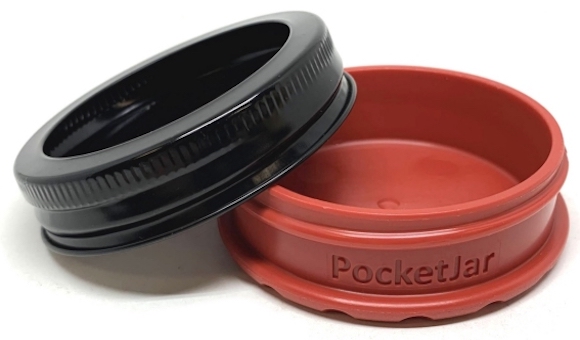 Last week I was privileged to get one of the new PocketJars, version 2.0. If you don’t want to read the entire Blob and just want me to cut to the chase, it is an improvement over the original, and the original is great. Is it worth getting? I’m glad to see them working on the design but I still love my original versions just as much. Answer: Yes, it is worth getting, especially if you don’t have any of the originals.

The PocketJar is an original design manufactured and distributed by The Pipery. But you can get them from other outlets that are branded. The Pipe Nook is the first to come to mind.

This is just me, but this is how I use them. I have a little travel bag where I keep my pipes, a pipe roll and all the things that go along with pipe smoking. Even when I’m just outside and not even away from home, I use most of this. I keep the blend I smoke the most in a tiny mason jar, the PocketJar lids fit perfectly on the jar. Besides that, I keep two or three other blends since you never know what you’re going to want, each in a PocketJar.

Between the PocketJars coming in different colors, and them being branded, it offers you many options. I use the combination of different colors and different lids to be able to put different blends in each one, and still keep track of what I have. I’m not going to empty out the PocketJar to carry something different, I’m just going to get a new one. I know they aren’t meant for long term storage so I don’t want to go overboard, but I’ve never had any trouble keeping tobacco in them for a week or so.

The only thing I have to be careful with them is that I tend to overpack the PocketJar. I cram in as much as possible. Then when I take the first bowl out, I have to be super careful because I end up spilling tobacco over the sides. But since I am over the pipe roll it doesn’t matter. If I didn’t have that, I’d leave a little room in the jar.

If I’m just going to have a pipe, lighter and stick a some tobacco in my shirt pocket, you can’t beat the PocketJar. To be honest, I just don’t see how you can improve on it, but they have. I have to be careful here because I don’t want you to think that I’m saying they are so much better than the originals, that you think I might be bad mouthing the original, I’m not. There is nothing wrong with the original version and I love them. If I never got the newest version I’d be totally happy with what I have.

This might not be fair but I only had one sample to go off of so you really shouldn’t go by that. The fair way is to use a good sample size. Because of that I won’t give you exact numbers, and believe me I can get exact numbers.

The thickness of the jars is much thinner. I don’t know anything about 3-D printing which I think the first ones were and maybe they needed to be that thick, but for holding tobacco, they didn’t need that thickness. These are much thinner not only in the walls, but the bottom is very noticeable even without precision measuring instruments. The threads are still beefy and grab, and hold, the lid tightly. I’ve never had one work its was loose, and you can tell the new ones are the same. The PocketJar branding on the side of it is deeper and crisper than the old one and looks great.

It does hold more. The one I got compared with an average of 5 old ones I have here, I got an 11.5% increase in volume. They advertise a 12% increase and I’d say that’s true. I will take advantage of the bigger size not to put more tobacco in, but not pack it as tight as I do.

The biggest claim they make is it seals better. Well, guess who has a waterproof tester for watches? Yup, this guy. PocketJars are not designed to withstand a huge amount of pressure, but I can tell if air is leaking by when subjected to a difference in pressure across the sealed lid. Before I did the test, I put them each on a piece of glass to see how true they were across the seating surface. The newer version was obviously much better.

You can tell the process they used to make them, and the quality control is much higher. I knew what the results of the test were going to be before I even did it. Sure enough, the claim that the version 2.0 has a better seal than the original is true. Much better.

Does it really matter? I’m not using the PocketJars for long term storage, but do empty them out after a week if there is anything left. Maybe I won’t have to do that. The only reason I have tobacco left is because I carry several jars with me and might not get to one or two of them. I think that seal is as good, or better than you are going to get on any tin you open. I usually get tobacco into something I can seal once I open a tin. This might meet that criteria. Not that it holds a lot, but it’s enough for anything I’m going to want to carry around.

My thoughts on the new PocketJars is that it lives up to all it’s claims and can’t imagine not having some around. They are as necessary as a tamper or pipe cleaners. You can get away without any, but why would you? If you’re keeping your tobacco in sandwich bags, stop it. Pouches are fantastic, but they hold almost too much tobacco and there is no need to carry that much unless you are going to be away from home for several days.

Is version 2.0 a game changer? No, the original PocketJar was the game changer, this is just an improvement over that.

Just like the original, you can have a custom logo put on the lid, just like I did with Briar Report. If you want to mix up the designs (which makes identifying tobaccos easier) and want to use the Briar Report one, feel free. I’m not going to complain. I’m sure they will do that for you if you ask. I will suggest you get the mixed color packs. Don’t just pick out your favorite color. I’ve found the different colors come in handy when they are tossed into the bottom of your bag.

This is a no-brainer item for pipe smokers. Go on The Pipery’s website, or get them from The Pipe Nook or mooch them off of someone who has them (I give them away once in awhile) or catch them at a Pipe Show. The Pipery will be in Vegas coming up. Stop by and say hi and pick up a set of PocketJars. You’ll be glad you did.