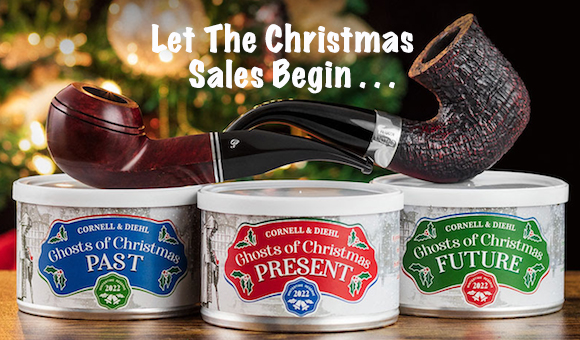 Good day Pipe Smokers. What a wonderful day to sit back, light a morning pipe, drink your coffee and read the Blob. What could be any better? Hope you’re telling your friends that you are not a real Pipe Smoker unless you check the Briar Report every morning and read the Blob (no link necessary).

Earlier in the week I mentioned that I was going to start talking about some of the retailers that attended the recent Las Vegas International Pipe Show. As usual I got distracted, but thought about it last night. I better get hot if I want to get through all this stuff by Thanksgiving. U.S. Thanksgiving, not Canadian. Too late for that.

Our friends and correspondents on the ground Mr. Flat Cap Piper and his co-host Lady Fire met a lot of pipe carvers and other people during the pipe show and we wanted to share some of it with you. Today I’ll be talking about Mr. Don Warren. But first a little news and information.

Over the last couple of days I’ve gotten a few YTPC channels that people want to see us mention. I had a fear that I would get either zero submissions or a hundred. The first would mean that there is no interest. The second, so many that I wouldn’t be able to highlight them like I envisioned. It would just end up being a big list of names. Not what I want.

Having a handful is perfect. By the time I add them to the other names I get from what the other presenters suggest, it should be for some nice reading.

Already With The Deals

Not a Christmas special but Pipes and Cigars are taking another 15% off Stanwell pipes. Inexpensive to begin with, so if you’re looking for that value type of pipe, you might want to check it out.

Also, the newest JR Cigar catalog just came out this week. If you’re the type to just pick up a stick or two, and you already order from Smokingpipes, that might be the easiest way to go. If you’re hard core about your cigars and want to save a few bucks and have a little better selection, then JR or Cigars International is probably a better option.

JR has a 10-count sampler free with selected purchases. Sure you have to buy a box of cigars, or bundle, but the prices are really good and you get a sampler free that’s worth $125. You really can’t go wrong if you like Drew Estate. Undercrowns are sooooo good.

Simon talked about PIpe Magazines and how much work goes into them. He mentioned other pipe content that is being created on a continuous basis, and all the work that goes into it. While I’m on a much smaller scale, I know what he’s talking about. One of the reasons I’m always trying to think of ways to promote and help those producing pipe smoking content.

If you get the chance to promote or mention some of this stuff, that would be so nice of you. If you don’t have the platform, I’ll give you mine. Anyone is welcome to write anything to post on Briar Report. If there is a pipe maker or tobacco blend you want to share your thoughts about, write it up and we’ll publish it.

How does Simon manage to make his way around London? The streets are too narrow and the markings on the road don’t make any sense. And he does it all while tamping and relighting!

Mr. Warren is a pipe maker from Albuquerque, New Mexico and can be found online at dwpipes.com. He makes some fantastic free hand briar pipes, but also offers many other options. Morta and other hardwoods including Hickory, Maple, Pecan, Walnut and even Olive wood.

While his website has some good information on it, if you’re interested in buying something I recommend you check out either his etsy store, or his eBay store. What caught my eye were the pipes from the Human Folly Series. Those that follow Mr. Marty Pulvers of Pulvers’ Briar knows about those pipes. Which by the way, Marty is back from his trip abroad and his website is back up to speed, just like him.

If you want to see the dwpipes table at the Pipe Show, hit this link and it will start playing just as they walk up to the exhibit. A portion of it was a little hard to hear, but they got it fixed right away and you got to see Don showing off some of his Free Form pipes.

Pipes & Cigars has a little feature about Mr. Warren on their website that reads;

“Located in the American southwest, Don Warren has been a wood worker for many years. Having honed his skills with his tools he has now taken to making pipes. Crafting pipes with a unique style, as well as keeping with the masters of yesteryear. He is very skilled at working with woods other than briar. We have received pipes made of Pecan, Maple, Myrtle and a few other unique materials. His fit and finish will certainly impress you, and the prices of his Don Warren pipes will allow you to add one to your collection without breaking the bank. “

I hate that term. I guess if you only work 5 days a week, it is in the middle. Since I often don’t even know what day it is, there is no middle. Or it’s all middle? Hmmmm, better get the Yardism Think Tank on that.

If you have any new content you want to us to mention, go back to yesterday and find the submission form on the Blob.

By the way, has anyone beat my Pipe Puzzle time of 9 minutes yet? Let me know. Now finish your coffee.