The first column of Critic’s Corner appeared last week and I was pleasantly surprised at the reaction. It was very nice to hear from so many people. Usually correspondence is sent to Phil so it was unexpected, but appreciated. It was also surprising to see that the column is already being read by a few quasi-famous people, including young men who try to get my goat. I’ve been getting made fun of and making fun of others much longer than they have been alive so it doesn’t phase me one bit.

Did you see the Harriet Herfer raffle for Danny Shore? What an event! It sure was nice to see so much support for a guy like Mr. Shore. Personally I haven’t watched him because I rarely use the computer  and that’s not one of the stations I’m assigned to, but there was so much talk of the benefit that I just had to check it out. Well done to everyone involved.

One thing that has been bugging me is some of the YouTube links that are on Briar Report. I’m talking about on the main page, not the roster [YTPC Directory]. I’ve clicked on some of those and people haven’t made a video in a really long time. One even turned into a vapor station. I’d make an exception for someone deployed overseas but if they aren’t making any new shows because they are playing games or at protest riots, screw them. The only problem is if I bring it up at the weekly meeting I know what they will say  – “OK, you go through them”. The hell with that. I’m hoping that by me writing it here they will get the hint. Cull the chaff.

Don’t want to get into answering personal questions in this column, but I was asked what my favorite Stogie is. That’s an appropriate question so I’ll 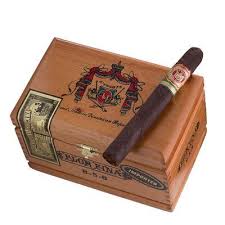 take it. It is not “anything that’s free” which some people seem to think. Sure I get a lot of free smokes because all these guys want to do is smoke their pipes and leave the good stuff on the table, but that’s not accurate. I am for sure what you would call an Arturo Fuente man. The 8-5-8 Maduro has been my go to cigar for many years. A Perfecto!, that’s right. I generally prefer a Robusto or sometimes a Gordo, but in this case I make an exception. I can get them from the Indians for five bucks each, plus they punch my card so I get some free every once in awhile. I remember the Fuentes before the embargo and to be honest I don’t think they were any better than they are now. The climate in the Dominican Republic is the same as Commie Cuba so the tobacco is just as good. The 8-5-8 is an outstanding smoke. If you want to send me free cigars that is a good one to start with.

Briar Report’s Christmas event is already planned and I’ve been elbowed out. Something about Stogie Report costing money instead of making it. Jerks. What am I supposed to do? I’m no salesman. How many cedar cigar lighters does a guy have to sell before he can start having giveaways of his own? It turns out it a lot! But next year will be a different story. If we have a good 2019 a lot of us might have some 8-5-8s in their stockings next year.

Bill actually brings up a valid point and we admittedly let our linked YouTube Pipe Community channels on our main page go for far too long without cleaning it up. As I scrolled through it I was surprised at the number of channels that no longer put out any content. I feel bad having to remove them as there were some that I really enjoyed, but to have fresh content, it is only fair to replace those channels with ones that are more active and relevant for the people who visit our site. It’s also too bad that we can’t add everyone, but the space is limited. You may notice that some new names appear on the scroll. Please accept our apologies for letting that slip. Our goal is to have the best web site possible for pipe and cigar smokers. Thank you to Bill for keeping our standards high.

Do not send Bill free stuff.