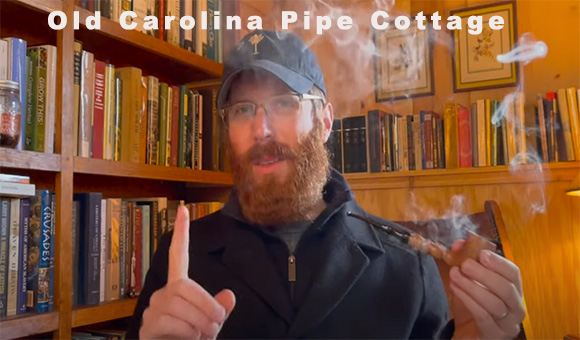 There were other things I planned on talking about today but the video Old Carolina Pipe Cottage put out is just amazing. Mr. Harrelson did a wonderful job in the video Pipe Smoking: An Unwritten Code of Behavior I had to watch it three times. That’s an hour from someone who usually limits watching one video to ten minutes each.

My first introduction to Old Carolina Pipe Cottage was from The Spurgeon Piper, in a video they did together. It looks like it’s the most watched video on his channel. Rightfully so, by the way.

The points covered in the video are spot on. I can give it the old “I couldn’t have said it better myself” line and it’s true. While this is exactly how I think, I could never have said it so nicely. Just perfect.

I could talk about his points one by one but then this would be way too long. Maybe in the future we can go over them one at a time. It is such a great video I encourage you not only to watch it, but take it to heart.

“A pipe is more than hobby, art, or pastime: it’s an extension of your personality.”

Maybe I’m confused here, but Robert of enasdad lists his daughters in reverse chronological order. Who does that? He mentioned that his youngest daughter is prone to prank him, and her name begins with an E. So why isn’t his channel’s name anesdad? I’m more confused about that than the fact that he found a head in his bed.

Last week he was trying to get a date for that plastic cranium, Karen. I suspect Captain Bailey’s Adventures‘ little friend would be the logical choice. Hugo is his name if I’m not mistaken. Don’t take this the wrong way, but Hugo sort of creeps me out. I’m sure he’s a very nice fellow but I always make sure it’s not the last video I watch before I go to bed. If you know what I mean.

So today we have Paul The Piper live at 11 am EST (4 UTC), Robert live at 7:30 Eastern with Donald Hughes out in the parking lot tailgating at 6 pm. Then Smoking Cardboard doing a special live event at 9:30 Eastern.

Not going to take up any more of your time. I’ll just mention that you’ll be glad to know that my smokingpipes order came in right on time. Even with a good size winter storm in the mix. Thanks to Mr. Terrence Barr and his team, not to mention the USPS, for keeping their eye on the ball. Well done Mr. Barr, you earned yourself a link.