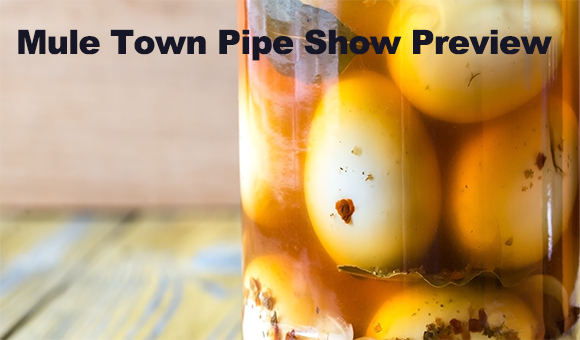 We are starting to learn about some events that are scheduled for the upcoming Mule Town Pipe Show on March 18th. If you have an event or are a vendor that will be there, let us know so we can share it with our readers.

Dr. H- has reported that at 10am on Saturday, the 19th, there will be a Matches860 Tribute Smoke. Anyone interested in taking part is invited to meet up and share their favorite memory of Mr. Harden. This should be a great get together and the perfect opportunity for anyone interested in the YouTube Pipe Community to have a great smoke while reminiscing on one of the greats.

Buttons For Your Britches

Mr. Larry Blackett put out a video yesterday showing off the three new St. Paddy’s Day tampers. There is the 4-Leaf Clover, Shamus the Leprechaun, and Saint Patrick himself. They are all available right now for mail orders, but he’ll also have them at the show.

Larry told me he will be bringing along his entire line of tampers so surly there will be something you’ll love. Hopefully he will sell enough to pay for the gas to get him there. He’s budgeted $1,600 on gas for the round trip.

Also, like I mentioned yesterday, The Pipery will also have a booth. They plan on bringing a bunch of great pipes and their PocketJars which are always a huge hit at the pipe shows. Mr. Flat Cap Piper highly recommends you check them out.

Buttons For Your Britches

Today is the last day of the Tobacco Pipes Japan Spring Sale. These sales are few and far between so I urge you to take advantage of the great savings. If you wonder about what Japanese pipes are like or are curious about the artisans, here is a short video on Minoru Negate that you will love.

When talking with one of the exhibitors, he told me that accommodations around Briar Works was almost impossible to get at this point as many places are already booked. I’m not saying it would be impossible to find a room now, but if you plan on going and don’t have any reservations yet, you better get hot or you’ll be sleeping in the back of Willie’s VW Bus.

Another rumor is that Mr. Yardism might, I said might, make Monday live shows a “semi-regular” thing. that would be fantastic. I have a habit of checking the weather in San Jose before any of his live shows. I’m hoping for high wind and that he’s sitting next to the garbage can.

Craig has, in fact, reached that 250 subscriber mark on his Hiking Pipes YouTube Channel. He had said that when he got to that point he would throw a little give away. He’s issued a humble thank you and said he would make a follow up giving the details of that give away.

The video I mentioned earlier, and in the newsletter that Flat Cap Piper made is going up today at 9 am Eastern. So now that you’re done with The Blob, hit this link and check it out.