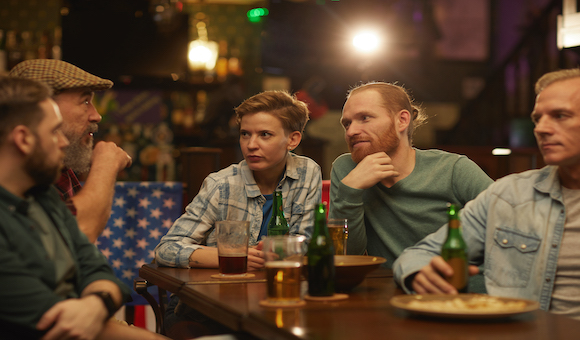 Years ago, thirty or so, we used to vacation in Canada. Way up North on the Albany River, enjoying some of the best fishing in my life. Despite the bugs ruining things some years, we would go back because there was nothing like it. It didn’t seem as strange at the time as it does now, even though it was perfectly normal. It seems strange because we went to go fishing and nothing else. That was normal.

It was really before the internet as we know it. I don’t think many people even had cell phones, at lest none of us did. We would drive up there, took around 16 hours, then fly in for the last two hours. They would leave you on the river and pick you up the following week. No TV, no radio, no internet, no cell phones. At the most I would bring a couple of books, but didn’t spend much time reading, and a box of stogies to share. There was always so much to do and we had a ton fun.

Now things are different, life is arranged around the internet and the internet is empty. You would think it would be a place that was so rich and meaningful, and in some respects it is, but overall it isn’t. It’s like the world’s biggest encyclopedia that can talk back to you. It’s sort of so over stimulating that it’s vapid. Almost fake. Everything and nothing. The digital version of heroin.

People put up photos on Instagram to pretend to be what they want others to see them as. They value things like how many thumbs up clicks they get. Everybody and their mommas are “influencers”. I pray the day never comes when they influence me.

One of the good things that you can get out of the internet, is to meet and interact with people which you probably would never have met. But still there is that wall, usually because of distance. I’m sure you fill in a lot of the details in your head that might not match up with reality. I’m sure some people would say it’s better than nothing and in the best case, a wonderful thing. But what could be better than spending time with a friend?

Did you read the letter we published on Friday from Mr. Badcough? I think if you read between the lines of that letter you can see where he’s not only anticipating the pipe show and all that goes along with that, but using the opportunity to make real friends with people who up until now have been on a “virtual” level. One handshake can mean so much more than hours spent commenting and chatting online. A “genuine . . . connection” as he put it. That was very profound. None of the fakeness of the internet, just friends.

If you haven’t read his thoughts, take a couple of minutes.

Hope I don’t sound too cynical about the internet. I’m sure people get a lot out of it that they wouldn’t otherwise. Make friends they wouldn’t have met in a million years. But there is something about being with someone that can never be equaled with a bunch of ones and zeros.

If you want to see who from the YouTube Pipe Community will be attending, go over to the Briar Blues channel and check out the list he has going. If you plan on attending and you are not on that list, send Mike an email and I’m sure he will include you. If nothing else, I’ll publish it right before the show starts so you can see the most up to date information.

Flat Cap Piper and Lady Fire will be at the show. I mentioned in the newsletter today that they are also featured in the Pipes Magazine Podcast that comes out tomorrow. Interviewed by Mr. Brian Levine who is also the Grand Poohbah of the Las Vegas International Pipe Show. I’m sure the subject will come up.

They will be broadcasting from the Show and if conditions are right, which why would they not be, will be live. That will be something to see. They always have fantastic walk arounds at these pipe shows, and now that they know a lot of the vendors personally, it should be even better.