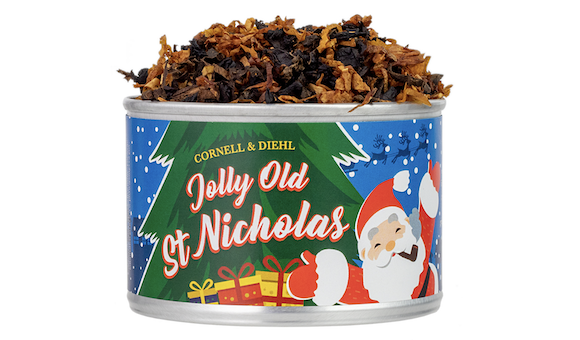 Two weeks ago we reported that Smokingpipes was going to release the Savinelli Christmas pipes and C & D’s Jolly Old St. Nicholas on August 23rd. Yesterday was August 23rd and I totally forgot. But my dear friend Picking & Piping Matthew shot me an email reminding me. What a save! He totally had my back and I sprung into action.

I know, I know, I say it’s weird when people jump up and down and go nuts for the small batches. Guilty. For some reason I thought the blend would never be available again and when they announced it was being offered this year, I caved. For the record, I never make fun of people for doing that, I just say it’s funny. Got 13 tins coming which will last me a few Christmas seasons. Hopefully before the fourth year it will be made again.

I’m not sure this is a type of blend that will age well, so if I really went overboard I might regret it in five years. Might regret not getting more, but I have a few years to worry about it.

Took a pass on the Christmas pipe. Not saying I don’t want one, but for now The Pipe Nook is not planning on stocking any, but might. Don’t want to buy a special pipe like that then find out later that he stocked them. So for now, that’s on hold. I can always get one somewhere else, but if there is a chance of getting one for Eddie, that’s where I want to get it. Smokingpipes has enough of my money.

If you were thinking about getting a Savinelli Christmas pipe, which are really beautiful this year, maybe you should think about sending The Pipe Nook and email, or letting Eddie know you’re interested. If enough people tell him that, it might be worth his while to get some in. Small companies like that can’t stock everything, but if he knew he wouldn’t have to sit on them, it might happen.

It also explains why I like Squadron Leader so much. I like it more now than I did before. You hear experienced pipe smokers (which I don’t really consider myself) say if you don’t like something, just give it time since tastes change. A blend you might not like that much will turn out to be in your rotation years from now, you never know. I’ve found that to be so true.

The Spurgeon Piper is about 15 years behind me in my pipe smoking journey. Much more age-wise. His tastes are moving away from the mellow blends and going for more full bodied tobaccos. Just what I did 15 years ago. Now I’m going the other way. Give me a tin of Orlik Golden Sliced over a Pirate Kake any day of the week. Maybe a couple days a month, I’d go for the heaver blend. But that’s just me.

Yesterday The Spurgeon Piper put out a review of Squadron Leader and I wanted to mention it here. Not. because what I just said about it, but because I linked to it on the News site. I’ve never linked to content like that before, but I’ve been thinking maybe I should. So many more people go to the news website, many who don’t watch the YTPC. They might be interested in things like this, especially the cigar smokers who have a casual interest in pipes and want to find out more.

As long as I don’t overdo it, I think it is a good fit. Videos that are informative and keep to the point are a valuable resource. I’m not going to link to videos where a review is secondary to someone talking about all kinds of other stuff. Personally I don’t mind those type of videos, but ones I link need to be focused.

I’ll keep doing that for the rest of the year and see how many people click on those links. If nobody does, then I’ll stop, but for now I want to expand the number of stories we link to. If there is something you think readers would like, don’t hesitate to let me know.

Mentioned The Pipe Nook above which perfectly leads me into news about his sale.

To me the Fall is the best time of the year for Pipe Smoking. I know Spring is a time we all look forward to, but I always enjoy myself more in the Fall. The weather is perfect and it’s so relaxing to sit out on a cool evening. It’s like heaven. In my opinion this is the time to have a sale to stock up right before Fall. Eddie was thinking the same thing.

Be sure to use coupon code FAREWELLSUMMER at checkout to receive 15% off all in-stock items site-wide, today through Sunday, August 28th! You’re not going to see a sale this good until at least the holiday shopping season, so now is the time to stock up on essentials and grab that pipe you’ve been eyeing.