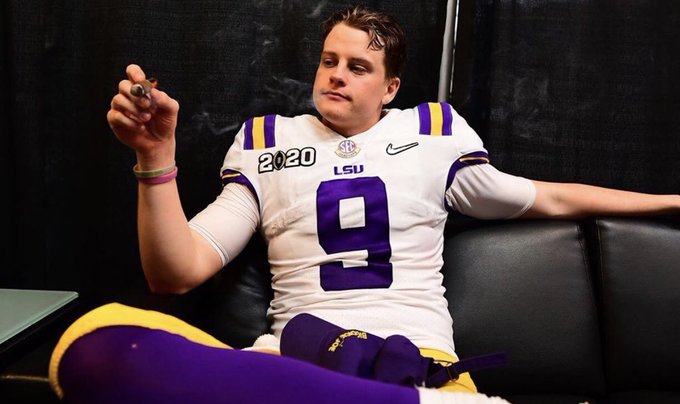 Just updated the news website. One of the quarterbackers who is playing in the Super Bowl smokes stogies. I guess he thinks he’s Red Auerbach or something. Couldn’t even tell you what team he plays for, I think Cincinnati. Didn’t they fold in the 30s? I’ve already forgotten his name, but it’s not Jack Kemp.

Wait a second. Luke Risner is a Cincinnati guy. Probably a big sports fan too. Good for him. Odie I’m sure is a fan. I’ll bet Buckeye PIper is also on the bandwagon. What team are they playing? Maybe there are some YTPC side bets going on. OK, now I gotta go look. Didn’t want to do this but I started down this road.

Probably not going to happen, but I’m going to keep my radar up for Flat Cap this weekend. Maybe he’ll pop on for a quick Super Bowl prediction. No prediction from me except that the morons at work will come in the next day all giddy talking about their favorite commercials. Like clockwork.

Who gets excited about commercials? Ones that don’t even have monkeys in them. I better stop here or people are going to hate me.

Speaking of hating me, I just started a new thing on Twitter. Doing a parody of the big Newfie trucker protest, I said I was going to smoke my Freedom Pipe and wanted people to bring pipe tobacco to keep me going. Of course it was a joke. I even put one of those pound signs in front of the word because all the cool people do that to indicate how serious they are. It has something to do with key words.

Everyday what I’ll do is smoke my Freedom Pipe for some cause. Since I really don’t have any cause, I’ll have to make something up. That could get touchy. No matter what I say, someone will be offended. It’s only a matter of time before I get lectured to, or yelled at. So why do it? Because I’m stupid and can’t help it.

Donald Hughes has a pool going on to see how long it takes for me to get in trouble. I can’t take part because it would be like betting on baseball. Judge Kenesaw  Mountain Landis would throw me in jail. All I’d have to do is mention the plague or something like that and it would be all over.

Now that I’ve mentioned both Donald and Buckeye, maybe you should check out Buckeye’s video on mental health. 140 views and 57 comments. That’s a lot of engagement. Looks like a topic people are interested in.

It’s early and I haven’t watched any of the live shows from last night. Saturday mornings are long as it takes quite a while to go through them. Everybody seems to be playing their guitar lately. Maybe I can make a special appearance on Glum Chum‘s show and play the Jew’s Harp.

Today is the St. Louis Pipe Show. If you’re just reading this you are probably not going. If you’re already there, hope you have fun. Maybe we’ll get a video or an update from somebody attending.

Rumor going around that there might be a new podcast from either Killer Briar or Concerning Pipers. Maybe both. This has not been confirmed but I checked all the podcasting platforms and couldn’t find anything. If I do, I’ll let you know.

There are a couple of good sales going on for the discerning pipe tobacco shopper. Iwan Ries & Co. has a storewide sale with 10-30% off. Depends on how much you spend. It’s only this weekend, Feb 11th to the 14th.

Tobaccopipes.com has 15% off Presbyterian Mixture. That’s been hard to get lately, so if it’s something you cellar, now is the time. They also have Plum Pudding, Sutliff Crumble Kakes and White Elephant Pipes on sale too. Use code: SAVENOW.

I’ll put links to those last two in despite they are not advertisers. Sort of a Valentine’s present from Briar Report. Show them some love.

OK, this is getting too long I’ll let you go. Have fun this weekend.