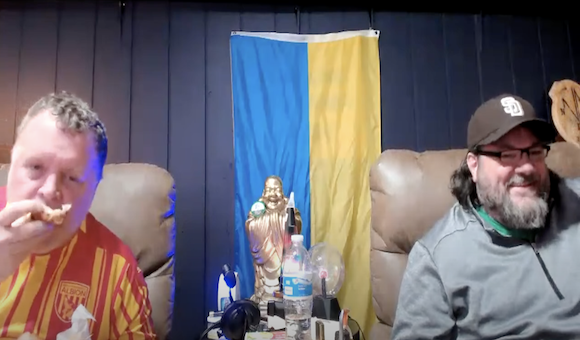 Good day. Can’t believe it’s Thursday already. I’m a bit tired this morning because I watched The National Mafia Live last night. That is late for me. When I do anything it’s always with the next day in mind. Because it’s always the day after when I have to pay for what I do. I’m sure Yardism could find some great wisdom in there, I’m just dragging.

I get so excited when I know I’m going to be watching that show. Often I show up a half hour early, right when they put up the link that tells you the show is coming up and if you want a reminder. I just leave it up on the screen so I won’t get distracted. Usually just keep working on something else. 1 waiting. Then 3, then 7. It’s actually a pretty good set up. Gets a lot of the greetings out of the way before the show starts.

Then the show starts and you wish it would go back to the black screen.

I don’t mean that. It’s hard to joke when you’re writing because someone not only might take it wrong, someone will. I guess Mr. Knight Piper never heard of the adage of never let anyone take a photo of you eating. They will never look good. But that might be why he does it. By the way, I was being very kind when I got that photo. I just wanted to give you a good idea of what I’m talking about, not embarrass him. John wears those crazy shirts which I thought were some sort of pajama tops, but apparently they are from sports teams.

The thing about that show that amazes me most is they only have two hundred and fifty something subscribers. That’s crazy. I have more fun watching those shows than almost anything else. They are so funny. If you’re in the YTPC I would think it would be a given that you’re subscribed, but I guess not.

Yesterday they announced a give away that will be sponsored by Briar Blues. Couple of very nice Savinelli pipes. But he’s not going to give them away until they reach 350 on the ticker. It was funny because last night Willie was trying to bark for subscribers without sounding like he’s barking for them. Dancing all over the place. All that does is give John a reason to bust his chops. You got to be careful around a guy like that.

Should have just gone full Jerry Lewis and put up a tote board. John could be singing songs at one in the morning with his bow tie undone and looking like he is recovering from malaria. The wrenches could be manning the phones as subscribers come in.

Last night they gave away a tin of Old Ironsides that was supplied by Tobacco Pipes International. As usual Charlie from Boca To Boynton was aced out. Twice. By the way, hit that link to Charlie. It’s the new one, in case you’re still looking at his old one, which is blank.

Tonight is enasdad live from the Myrtle Beach. He’s been freezing his rear off, but won’t admit it. The forecast looks good and he should have a nice show tonight. I’m really going to try to watch that one too. 7:30 Eastern. Don’t know if Donald will be tailgating or not. His schedule has changed a lot. He gets to come plodding home and say “what a day!”, “You would believe what happened to me at work today”. Stuff like that. Waiting for someone to bring him a drink while he waits for dinner to be served. All that kind of workin’ man stuff. Probably no time for tailgating. We’ll see how his schedule ends up.