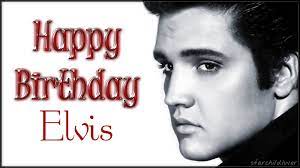 Yesterday was the anniversary of the passing of Mr. Neil Peart. Can’t believe it’s been two years already.

Today would have been Elvis’ 87th birthday. A day nobody should have to work, but here we are. Years ago I contacted Graceland and tried to find out if they had any pipes in their collection and wanted to find out what kind of tobacco Elvis smoked. After a week I called them back and they claimed they looked into it and there was nothing. According to them he would just smoke a pipe for photo ops but was actually a cigar smoker.

They said he always had a lot of cigars around since people used to give them to him all the time. I read where he kept Hav-a-Tampas stocked. Truthfully, I wasn’t that interested. When they started to talk about the cigars I asked them if Pricilla ever sent birthday cards to her brother Elvis Aaron Presley Jr. Boy did they clam up. Didn’t want to talk about it.

Elvis Jr. is sort of well known around here. At least he was. There was a radio station that used to play him all the time. Why would Elvis give him mother money and send the kid to school? He just happens to look exactly like Elvis without even trying.

Glum Chum Piper‘s live stream went pretty good last night. Only about half the crowd as enasdad but it’s a start. I would have sat on the back steps and put on a big beard and hoped nobody would notice. He announced that he will be having a give away coming up. Something to spice up next week.

Speaking of endsdad, my suggestion yesterday might need revising. I thought McCelelland would be a good name for the whale, but maybe something like Mick Clellend would be better. Someone will have to polish that a little, I’ve reached the outer limits of creativity. Especially when it comes to whale shaped memo pads.

Got the recap for the Country Squire Radio 2021 Awards show up. It takes me awhile since I usually make it link rich. To win something like that is sometimes the first time a few people have ever heard of you. They can’t link to things or show you anything on a podcast so I want to make sure people can find who they are talking about.

Going through it all is not as easy as it sounds. There are not only a lot of people mentioned but sometimes they are laughing or talking fast and I can’t catch it. Being old and half deaf doesn’t help either. I tried to figure out the name of one of the pipe clubs, and eventually gave up. I must have listened to it 200 times. I searched for anything that even sounded close. Nothing. I just wrote my best guess and will have to apologize later.