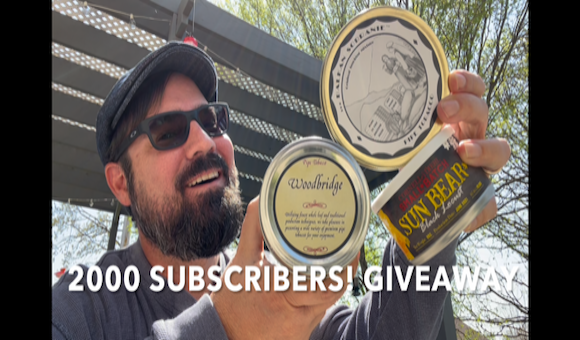 The May Pipe Puzzle is out and it may be the hardest yet. There are a couple of real stumpers in there. You may have noticed that I had a really good solution time despite the difficulty level. Two puzzles before I didn’t even finish it even though it was easier.

If you haven’t given it a try yet, let me give you a pointer. It helped personally to shave a lot of time, giving me a respectable score.

There are twenty words with the letters scrambled. They are the last names of famous pipe smokers. Before I started I thought that Matthew most likely made a list of 20 people, then scrambled them up. I didn’t look at the puzzle but thought ‘if Matthew made a list, who would he put on it?‘ There we’re six to eight names that came immediately to mind.

Then I looked at the list and those names popped right out. I just skimmed the list looking to see if they sort of looked like what I needed. Length, general letters, especially consonants. It probably took me 30 seconds to get the first six and another 30 seconds to get the next four. So I was a minute in and I had it half solved.

That’s as far as my plan took me because the one’s after that were hard. #4 and #19 were the hardest for me.

What really fooled me was that one of them I didn’t even realize was a pipe smoker. Now that I look back, I may have known but it would have been quicker if I wouldn’t have been thinking about who this pipe smoker could be. I should have just tried to solve for the name. It slowed me down.

In the end I had a good time, but I was really sweating it. Give it a try and I hope you beat my time.

Mr. Hobbiton Piper is having a give away to celebrate his channel reaching 2.000 subscribers. It’s going on right now and goes through to the 15th of May. The Sunday after this coming one.

The give away includes sealed tins of C & D Sun Bear Black Locust, The Balkan Sobranie, 6 ounces of Esoterica Woodbridge and more.

The rules of the give away are posted in the notes on his video and we included them in the entry we have in the Events Calendar. What he is asking of entrants is to know what your favorite summer pipe tobacco blend is. So as long as I’m on the subject, I’ll take a crack at it. Mind you, this is in no way an entry into his contest. It’s one of the reasons I’m putting it here instead of leaving it in his video.

My answer is going to be very similar to many of the others that have already been mentioned, including Matthew The Puzzle Master and Hiking Pipes. I won’t say I smoke the same things all year but that’s generally a true statement.

There are a couple of things here or there that I save for outside. But not usually pipe tobacco. If the bugs are beyond the point of annoying, I’ll get out a big fat stinky stogie and really get the smoke going. That will keep them at bay, but I do it only as a matter of self defense. I’ll do the same thing if someone is going all out with the cigarettes. A man has to defend himself.

Otherwise, the pipe is loaded with Va/Pers or Virginias almost all the time. Once or twice a day I’ll smoke something else. The one thing I’ll add here is that where I like to sit, there is almost always a slight breeze coming off the lake. If you pack your pipe just right, it will require almost no relights. Just have to keep up to date on the tamping.

The problem is it’s very easy to burn too hot with the added wind. You have to be careful with the Virginia blends. But if you’re ready and you pay attention you’ll be fine.

Like Mike from Briar Blues says, it doesn’t mean it’s the right way to do it. It just means it’s what I’ve found works for me. The smart thing to do is experiment and find out what you need to do for the conditions, pipe, tobacco etc.

That pack is so important when you’re out in the wild. I like it tight. Coins or thick flakes are the best. Normally I’d rub them out but when outside I try not to disturb them too much. I go with my patented 3 layer method.

The tin will always have some rubbed out or loose tobacco in it and I’ll put a small layer of that in the bottom of the bowl to keep the draw clear all the way across. Then I do the fold & stuff method, filling the pipes to about 3/4 or maybe slightly higher. Then I top it off with more loose tobacco, keeping it below 7/8. Never filling it all the way to the top.

That little bit of loose on the top seems to help get it going, plus it makes for a more even layer of top ash that is so important when there is a breeze.

After having said all of that (if this were a video it wold have only been a minute, just seems longer written out) I’m going with my usual DeLuxe Navy Rolls and/or Orlik Golden Sliced. OGS in the morning, DNR after lunch.

The lake is always so calm in the early mornings. It’s like glass. Nobody is around, no lawn mowers going yet, no speed boats. Just some birds stretching their wings and me smoking a pipe.

Maybe I’m dead and have gone to heaven.