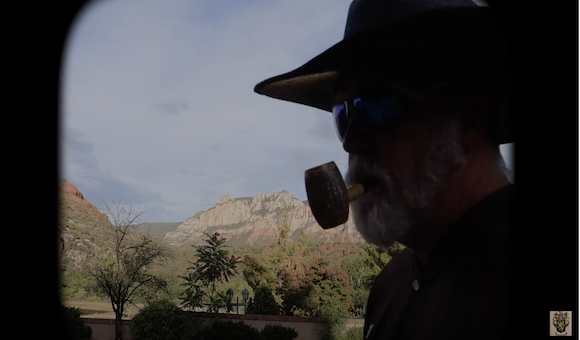 A new series produced by the talented Knight Piper has begun. The series kicks off with an introductory video talking about what lies ahead. John along with his son are headed West on an epic journey which they plan on memorializing in this series. The name of it will be Deadheads Redemption. It’s the story of a father & son, and his pipe. This has the elements of being something you can really look forward to.

Beautiful scenery of the U.S., pipe smoking and knowing The Knight Piper, good music. I really can’t wait for these videos to start rolling out. People who do original content like this really make spending the time on YouTube fun.

We wish the two of them the best luck and a safe trip.

Last night on the Chadism live show there were two things that struck me as funny. Actually a bunch did, but two stood out. First, during the Ornithology portion of the program, one of the commenters, a dentist we mentioned yesterday in another story, seemed very interested in certain species of birds. This struck me as odd since this man has only shown interest in one kind of bird up to now. The roasted variety. His interest was surprising. Just an observation.

The other thing I laughed at was when one viewer said that they have never seen the security at a “Gentleman’s Club” wearing tuxedos. I submit that the bounce staff could have been wearing full suits of armor with bearskin hats of the Queen’s Guard and they wouldn’t have noticed.

Personally, I don’t know what goes on in those type of establishments, so I can only surmise, but I’ll bet I’m right.

You know you might have too much tobacco when you get a large order in and you can’t find it. I was unpacking my latest order from South Carolina and putting items up on the shelf in the pantry. Not even the vault. The sleeves come wrapped in brown paper and as I unwrapped each one I put it in the correct spot. Having been called away in the middle of it, I left some on the table in front of the shelves. When I returned, I couldn’t find the sleeves. Spent 20 minutes looking for them, it was driving me nuts.

Of course it occurred to me that I had already put them on the shelf and forgot. But I don’t remember doing that and wasn’t sure. There is so much tobacco on the shelf the order was just a drop in the bucket. Is it possible to put a couple of sleeves of tobacco with the existing pipe tobacco and not even be able to tell? I had not counted the order as it came in, and unlike the vault I don’t keep as close an eye on my pantry inventory, I just go by impression. Looks good – looks low.

The invoice shows the correct order and I trust them totally, so there is no doubt I got it, but there comes a certain point when one doesn’t even know what they have anymore. Eleven pounds of a favorite blend, thirteen pounds, who knows. And that’s just what I have for easy access.

It’s not that I worry about not having enough, it’s that I’ve lost control. I should be more organized about it. I feel bad that a good amount of tobacco was just absorbed in the vortex of my unorganized chaos. It will get smoked one of these days, but I can do much better.