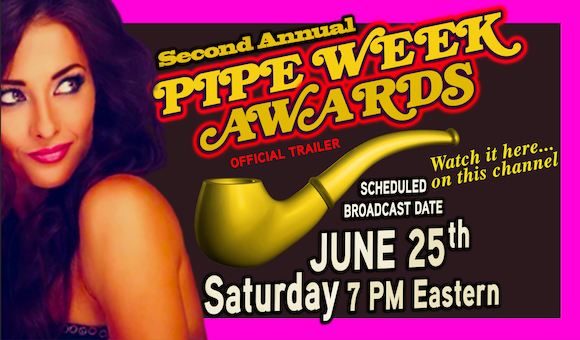 The Pipe Week Awards are tomorrow night. I’m past the point of being nervous. Nothing to do now but sit back and wait. There is no doubt we got the right host this year with Peter Piper NYC. The last couple days he’s been putting trailers out for the show that will air Saturday at 7 pm Eastern. The one two days ago was fantastic. It’s titled Official Notice but he had one out from last week. It’s funny and the quality is right up there with anything else on YouTube. Another video came out yesterday. That one is a little more . . . sexy. That might be the best word for it. This time just a quick reminder.

Before you get distracted, hit that link up there to his channel and subscribe to him. Click on the notification icon. I plan on being in my seat with everything I need in plenty of time tomorrow, but I’m sure you might not be as amp’ed up as I am. Getting the notification might be just what you need.

It will be a live event, so you can participate in the comments section. But it’s not going to be like a normal show where the host will be responding to your comments and that determines the direction of the show. The Awards will be going on and I suspect it will be moving along at a good clip. There is a lot to get through. You will notice that the Awards are more structured than they were last year. Well, maybe you won’t, but they are.

A Peek Behind The Curtain

So many channels were nominated in each category and we took the top 5 in each. So the process is even across the board and the top nominees all had multiple nominations or they wouldn’t have ended up on the ballot.

That’s as far as I’m willing to go into the process. I know last year I got a lot of thoughtful emails giving us suggestions on how we could improve the process. While we took all those suggestions into account, we decided to leave the structure alone. The success last year spoke for itself. It would have been very hard to improve on it, and we risked ruining it. We didn’t want too many categories, or open the voting to anyone and everyone. It had to be large enough to be meaningful, but small enough to manage. It also had to be immune to ballot stuffing or just a popularity contest. As far as the limited categories, having too many turns it into an “everybody gets a trophy” kind of thing. While that might be fun, it diminishes the ones we give out.

So we have what we have. I’m so proud of the job the committee did. They are unnamed because there is no sense in opening them up to criticism, which we will certainly get. If anyone thinks the process is a mess, they can direct it at me. I also don’t want people to apply pressure on them in the future. If you think a certain channel should have been nominated, keep in mind before you complain, they probably were. There are so many great channels in the YTPC, I do not envy they job the committee did. It was very hard to narrow down the nominations and even harder to vote. You wouldn’t believe how close some of the votes actually were.

Yesterday I had so much fun watching a couple of live shows. Robert’s show was a little strange because he couldn’t read the comments. He had lost his eyeglasses when they went to the bottom of the ocean during a shark attack. At least that’s how I understand it.

Tonight is going to be Glum Chum, CaneRod then . . . Oh no, Martin is on vacation! What am I going to do? Maybe someone will fill in. Maybe someone can drag Crowe out of the bar and he can do the show himself. Wait, forget that last one. Maybe Derek can solo.

Yardism went live last night, but it was too late for me. I was falling asleep after Robert’s show. I’m actually glad he cut it short, I would never have made it. At least it gives me something to watch this morning. Chad always has an interesting show.

Not going to go too long today, because I’m planning on putting out at least one, maybe two more Blobs this weekend. Plus I have to write the official Awards Show article, listing all the winners. It will come out right after the show airs tomorrow night. If you don’t watch the show live, don’t read the article or else it will spoil it for you. But I want to get everything down for researchers in the future. The only thing I will tip for you now is that Mark V.V., the ASMR Piper did not win. Despite all the work he did flicking lighters and slurping coffee, he sadly wasn’t nominated. Go figure.