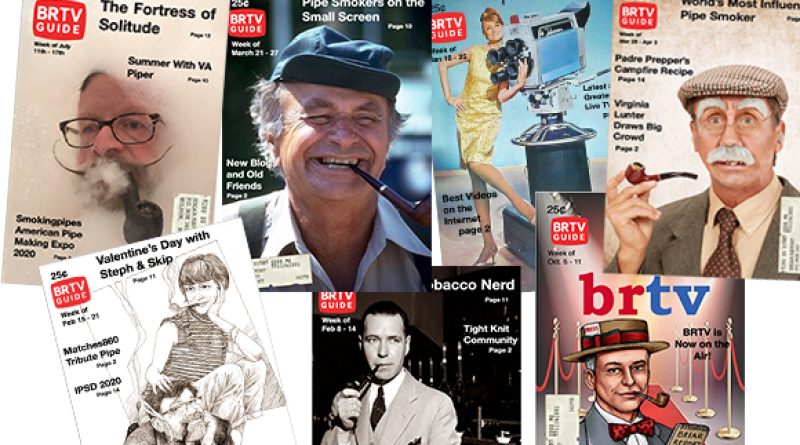 Tonight there will be a couple of shows that pay tribute to Mmmmmatches Eight – Six – Zero. There’s a winter storm warning in effect in Central Connecticut, from midnight Friday to midnight Saturday. Heavy snow expected. Total snow accumulations of 7 to 15 inches.

Not that John would have liked the snow, but we would all have gotten the report. Plus he would have had a great snow story for us.

What did I tell you about Robert taking on Thursday nights? I had said before that he would be great filling that spot formerly held by Briar Blues and before that Magnum P.I.. Normally I wouldn’t stay up too late but I’m glad I did last night. The show was really hopping, until it wasn’t. The chaps were whooping it up, and the comments flying. It has become as close as you can get to an online pipe club.

There are two whales now. I was thinking, they are both male and female, and you know what that means? Right, whale oil. Robert will have more than enough fuel for his lamp.

I haven’t thought it through yet, but he may have stumbled upon something. A pipe club where our blazers would have affixed an escutcheon displaying a whale of some sort. Robert will have to give it some thought. Karen is useless in this department.

Never would have guessed the kinds of television shows Robert likes. It was pretty much anything. The Ghost & Mrs. Muir! Who would have thought? You know he has a VHS tape of Stella Dallas he watches late at night. Anyway, it reminded me so much of the brtv Guide. Those were great. They took me so long to do each week. Not like the weekly newsletter. I can do that in a couple of hours if nobody bugs me. The brtv Guide would take me all week.

If we still had the flip book reader enabled I’d let you look at an old copy. We disabled it during the recent site upgrade to make it go faster. One of these days I’ll fire it back up for a week and let you browse the shelf of vintage brtv Guides. For now I’ll put a few of the covers up on the image. Great, more work I just gave myself. This will be going out late.

When I say full, I mean full. There is going to be some overlap so you might have to be flipping around if you want to catch everything.

Donald and Glum Chum Piper are doing their normal thing at 4 and 6:30, respectfully. Eastern Times, lads. Then, not only will CaneRodPiper be live with his Matches860 tribute show but so will All Briar’d Up. The night isn’t big enough to hold them all. They both come on at 8:00 pm.

Sgt. Savinelli was holding a place setting to possibly stop by the All Briar’d Up show, but with that weather report above, it’s highly unlikely. You never know, and I wouldn’t want to miss it. I guess you’ll just have to cross your fingers. Mike will also do a good job tonight, I’m sure of it.

Then the night goes downhill. Martin comes on at 9:00 for Let ‘er Rip Friday. The roisterers will be having fun, getting the host to down amber liquid and the fear of that Discount Daffy Duck showing up worries me. I’m telling you, watch his videos and set that guy straight. I know you want to laugh, but don’t let him bait you.

OK, I got to go make that image so I can get this out before noon. With that, take care, be well.