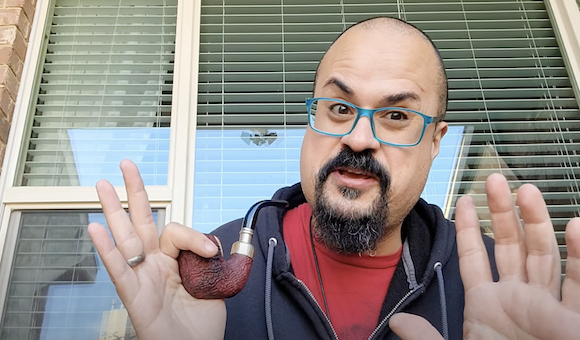 Flat Cap Piper wrote a post reminiscing about Three Kings Day. Celebrated on the Twelfth Day of Christmas, January 6th. Also known as The Feast of the Epiphany. I’m sure he was thinking about the tradition a lot since this week’s Popping The Tin episode is featuring the Cornell & Diehl blend We Three Kings. How could you not be thinking that?

I have some tins of that blend in the Cellar, but I went so hot and heavy into the Jolly Old St. Nicholas this year, I never got a chance to open one. It’s a nice Christmas blend and I’m anxious to hear what they have to say about it. The upcoming episode is going to be a Live Premier Show and will air this coming Tuesday, January 3rd at 4 pm Eastern.

January 3rd is also the birthday of Mr. J.R.R. Tolkien, for those keeping track of such things. Every year a pipe smoker or two will use the occasion to produce a video on the subject. It used to be something that would come up on Twitter, usually started by me. I assume it still is mentioned, but not with my participation.

I’ve mentioned it a couple of times recently, but unplugging is fantastic. I was probably what one might call a minimal user in the first place. I’ve shunned Social Media and my online usage was probably under a couple hours per day in total. Now I’ve even trimmed that way back.

I can’t even imagine how it would effect someone who is glued to their phone or computer.

End of the Year

Typically, I use the week between Christmas and the New Year to publish a few annual articles. Like the predictions, which by the way, I’ve yet to get one right. But circumstances had made that a tough one to get done. I lost a couple of days trying to catch up from a storm that elbowed its way into my schedule. Plus a little recovery time.

Didn’t even have time to Blob, which has been light this week. So to be able to catch up and not start the new year behind, I’m just going to drop all that extra stuff. I don’t know if that’s a bad sign or not, but I’m not going to worry about it now. I have a plan for 2023 and I’m not going to let anything knock me off track.

Best of the Year

I don’t feel too bad about ditching the end of the year content as I see that it’s pretty light across the board. Not too many special videos this year. Usually look forward to people’s Top 5 or Top 10 lists. There have been a few, but no where near as many as normal. Brad The Bearded Piper was the latest one I saw. The only other ones that are coming to mind right now are from JerzPiper and Jack Ryan Pipes. There may have been more, but that’s all I can remember off the top of my head.

Edwin Pipes Cigars did an interesting video on what blend surprised him the most in 2022. That’s actually a very good question. Caused me to put some thought into it, more so than a Best of the Year list would. I’m not sure of the answer. I did try some new blends this year, for one reason or another. On the advice of Mr. Kaplowitz of Kaplowitz Media and Mr. Spurgeon Piper, I tried some cigar leaf blend pipe tobaccos. Cloud Hopper, St. Espresso and another Warped blend I can’t think of right now.

Since I didn’t try a lot of new blends this year, those came to mind first. Did they surprise me the most? Kramer’s Father Dempsey might be the answer. Not sure, but I am sure that was a good question. See what Edwin’s choice was and I’d be interested to hear what others have to say.

Don’t forget about the give away Simon is having. My watch board is jammed with videos of people submitting their video responses. If you’re going to get in on that, you’re going to have to do so today or tomorrow morning. Good luck.

Speaking of give aways, Oiseau Briars had the drawing on his give away a couple days ago and it went wonderfully, as an existing customer won that beautiful pipe. If you wanted to learn more about Oiseau Briars, you can jump back and see what I had to say in a previous Blob post.