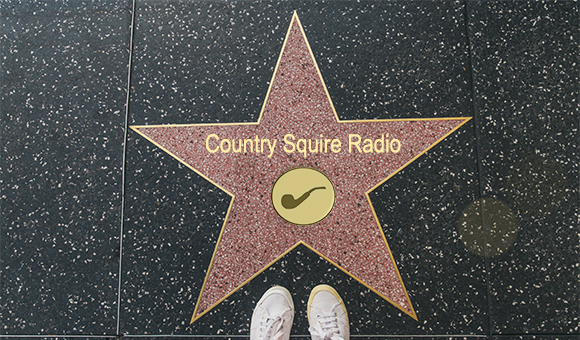 Hope all is well. Making my way through the Friday shows. Some good stuff there, even if you’re just a lurker like me.

Got a quick note from Mr. Donald Hughes. He says he doing well and busy at work selling stogies. I think they have him out front with a sandwich sign barking like at the carnival. No matter, just miss the tailgates. You never know, if we’re lucky we might see something during the holidays.

Beau from Country Squire Radio popped on YouTube yesterday afternoon and made an announcement about their upcoming plans. On January 13th to the 16th, he and Mr. Jon David Cole from The Country Squire will be in the city of Angels. Los Angeles Cal-ee-forn-eye-eh. If they play their cards right, they might be able to get there for free. I understand U-Haul has a big problem with all their trucks going out of the state and none going in. I’ll bet they would let you drive one back and not even charge you.

CSR has been taking their show on the road, recording a bunch of episodes from different locations. Miami, Houston and recently Vegas. Now they are headed to L.A.. Beau will be comparing his hands to the impressions on Hollywood Blvd. at the walk of fame, and Mr. Cole will be hanging out at Arnold Schwarzenegger’s house, who I understand has been know to smoke a pipe once in awhile. Have to find out what pipe tobacco blend he likes.

If you’re in the area of Chambersburg, PA today, Sat. Nov. 12th, there is going to be a meet up at Boswell’s. They have always been popular and I’m surprised how many people attend. Sometimes it’s just a few, but I’ve seen some where the room on the second floor was packed. Anyway, if you’re inclined, stop by and say hi for me.

There were a ton of great shows yesterday for Veteran’s Day. Too many to start listing and I’ll forget someone and feel bad. Even normally scheduled shows dedicated the content to Veterans. It seems like there is a higher than normal percentage of Veterans in the pipe smoking community than average. Just wanted to let each and every one of them know that we appreciate their service. As Chad says, not just yesterday but every single day.

Keeping it short today. Still have some leftover Chowder and I’m already thinking about it.