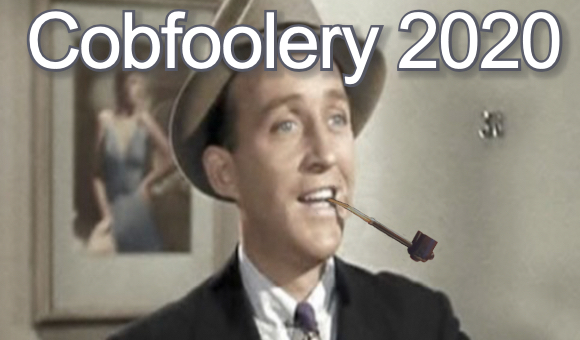 This year’s Cobfoolery is in the books and it’s time to take a look at all the entries and see who won.

The event is put on each year by Aristocob, aka Scott Markwood, proprietor of the Aristocob website a retail online store that specializes in Missouri Meerschaum Corn Cob Pipes.

Scott saw people modifying their “cobs” into all kinds of interesting and cool designs. From that the idea of making it into a competition for these carvers sparked the idea for Cobfoolery. He personally sponsors the event, coordinating everything through his YouTube channel, Aristocob. There is also a blog set up just for the event which you can find here.

The way it is set up is entries are broken down into three groups, the Professional and the Amateur, plus a special category we’ll talk about later. People that are in any way involved in the production, manufacturing, design etc., of pipes are automatically in the Pro class. Everyone else is considered an amateur.

There are also two different divisions that the pipes are classified into. The first is the Classic design. Those are pipes that can be fit into what is considered a classic pipe shape. If you are interested in learning about different pipe shapes we invite you to watch the Briar Blues series on the subject exclusive to BRTV. Shapes like Billiards, Bulldogs, Rhodesians and Oom Pauls are just a few. Pipes outside of any of these classic designs are what is known as Freehands. The sky is the limit in what these can look like. Some might not even resemble a pipe.

The two basic rules contestants must follow are, the pipe must be made from a Missouri Meerschaum pipe. They can add all they want, but must start with any Missouri Meerschaum pipe. The second rule is the pipe must be able to be smoked. The proof for this is people entering produce a video which they post on YouTube and in that video they must actually smoke their entry.

Remember that third category? That’s what’s called The Homegrown category. Meeting the criteria is much more difficult and will be covered at the end of this article.

That’s all there is to it. Now lets check out the pipes that were entered this year.

The Amateur Classic division had more entires than any other division, and therefore carvers face the most competition.

Entering for the first time is Jim from Lake Arrowhead. His entry Curley Head is an amazing design, especially considering it’s his maiden entry.

The bowl is quite unique and bamboo stems always add a lot to these corn cob pipes.

Y K made the RolliCob. It is made using a Rolex watch surrounding a corn cob pipe. A pipe which we first thought might be a knock off entry, but later found out the corn cob pipe is, in fact, genuine. We also believe it is the most expensive entry in Cobfoolery history.

Oom Howard entered two pipes. Hooters is a Falcon style pipe with a quiet avian feel to it. The second is called the Hoot-iator, that has a classic radiator design to it.

Monty Piper entered with the Bent General. An elegant pipe that has a dark finish and silver band.

John Copeland, a veteran carver entered The Briar and Cob Pot. It’s a classic straight stemmed pot made from a Missouri Meerschaum General bowl, a briar shank and a vulcanite “dental” mouthpiece.

The Cobbit Churchwarden was made by Lutasaurus, who notes that this pipes is worthy of the Green Dragon Inn. We have to agree with him on this point.

Wheeler Hammontree entered one of the most intricate pipes in this division. Named the Hillbilly Hookah features the pipe atop a moonshine jug with the Cob Nation logo on it.

The Maple City Pipe Channel hosted by Dave Allen designs and works on his entries all year. He always has entries in each of the classes including this year, the homegrown class. For the Amateur Classic he made a corn cob pipe that is almost an exact replica of a Bing’s Favorite pipe, named The Bing Cobsby. It has a long shank and stained dark it came out great.

Biscuit’s entry is The Scar Horn. A Horn shape made from several corn cob bowls, one of which was scarred during the manufacturing, but ended up giving this pipe some personality.

As you might expect, the level in the pro class took it up a notch. Only four entries this year but they are all excellent.

Starting oﬀ with Eric Sotelo’s hand engraved Aristocob pipe. It turned out so well it should be in a museum. It would could easily be a centerpiece in anyone’s pipe collection. You can really appreciate the amount of work that went into making this gem. The video goes over the making of this pipe and is well worth your time watching.

Being a hand engraver myself, I can appreciate the amount of work producing this took. Taking an original Aristocob and adding all this detail is risky but as you can see well worth it.

The True Aristocob is an exquisite pipe.

Dodif Pipes that always has very strong entries went with a not often seen shape but one that is really fun. His entry this year is the Mini Eskimo. Quite cleaver how he was able to get the bowl taper perfect using a standard Mark Twain Missouri Meerschaum pipe.

Chris Morgan from Morgan Pipes entered a stacked paneled pipe, named The Paneled Stacked Poker, that was made from an entire cob. The ﬁnish on it is without a doubt a one of a kind.

From D.H. Billings, an Emerald inspired pipe that has a Peterson 312 look and also has a bamboo stem and a custom bent emerald green stem. Named The Emerald 312, it’s a sleek, clean looking pipe that shows oﬀ the carvers eye for detail.

Jim from Lake Arrowhead entered The Rusty Cob that looked like it could have been made by a plumber 75 years ago. A very imaginative pipe.

Biscuit with his second entry, The S.A.M.M. Hammer is a pipe that looks like a Carpenter’s Hammer with interchangeable Framing Face and Finishing Face. Believe it or not, it actually looks like a claw hammer.

John Copeland second entry is with a pipe named Wing and A Prayer. A very organic and flowing pipe that certainly could be described as inspired by nature.

Captain Ahab was entered by Alex Willis entered a pipe made in distinct sections, including an amber stem and Whale ﬂukes

This is what some consider the best of the best. This is where the pros let their imaginations take them right to the limit of the Cob genre.

The ﬁrst made by Eric Sotelo is a pipe made from a fox skull and a deer leg bone. A very bizarre but intriguing design that is hard to describe. The skull has carvings all around it, as well as the leg bone. The pipe sits on a custom stand made of a Prong Horn antler and Coyote teeth.

Chris Morgan’s entry in the freehand division is the Cob Army Knife. The design is just ingenious. Of course it has many diﬀerent “tools” including a tamper, a knife, a fork, a bottle opener, screwdriver and a smaller utility knife. Also, what corn cob pipe would be complete without its own built in cork screw? What a great pipe.

Not to be outdone, Dodif Pipes came up with The Pierced Cob Fish. His version of a design that some of the most talented pipe carvers have tackled. The best thing is it’s entirely made out of corn cobs. Just looking at it you could tell who made it, his designs are always so fun and they look like it took forever to make. His designs are like no other.

The last category has only been around for the last couple of years. To enter this category you use corn cobs from corn you have to grow yourself. The seeds are direct from the Missouri Meerschaum company and it is from the same stock they use. This is the most elite division because of the commitment it takes from seed to pipe.

It’s no surprise that Dave from the Maple City Pipe Channel decided to put in the work and enter in this category. His entry is The Diamond in the Rough which is a Poker shape with a custom wrapped stem to give it a rustic look.

Mike H. also grew some corn for this year’s Cobfoolery contest. After a mishap with a drill and another by a pack of marauding raccoons he almost didn’t have enough of the cob to make a pipe with. Lucky for him there was just enough after he plugged it to come up with his entry The Eye of Tibbe.

And The Winners Are

Amateur Freehand:
First Place: John Copeland with his “Wing and a Prayer”. Runner up: Biscuit with his “SAMM Hammer”. Third place: Jim from Lake Arrowhead with his “RustyCob”

Homegrown Cobfoolery: First Place: Mike H. with his “Eye of the Tibbe” Runner up: Dave Allen form Maple City Pipe Channel” with his Diamond in the Rough”

The actual announcement from the official event channel

Chris Morgan Enjoying a Smoke After His Big Win