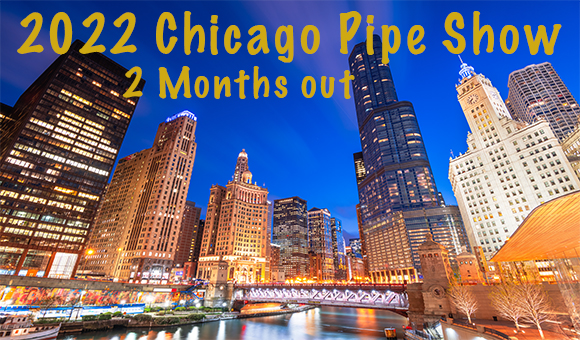 Hello Monday Blob readers. It’s an odd thing that I’m not able to fully understand, but the Monday crowd is as big as the rest of the week combined. I’m assuming it’s because of the newsletter coming out on Mondays.

It could also be because people like to check in once a week. If that really is the case then I should concentrate on writing this once a week and forgetting the rest. I won’t do that because there seems to be enough people who want to read more than once. If I had to guess, I’d say it’s probably the first reason.

I had been putting up special editions of The Blob on Mondays to take advantage of the crowd, but had no time this week. Maybe not so much “special editions” but ones I could write beforehand and save for a rainy day.

Now that I’m back on my normal schedule as of this past weekend, I’ll make sure they are more timely. If there is any subject you would like me to cover or topics you’re interested in, let me know.

Where else can you get up-to-the-minute pipe smoking news and gossip? Nowhere I tell you. Nowhere! Not even here.

The Chicago Pipe Show is less than two months out. May 25th to be exact. So two months and two days. Right now the West Coast Pipe Show is up in the air. Things did not fall into place and organizers are still noncommittal at this point. That leaves Chicago as the only big dog this year.

I’m thinking that people who were planning on attending the West Coast show might shift plans if they were only going to attend one.

With over 25 years under their belt the people in Chicago know how to run a Pipe Show, that’s for sure. Also it will be held at the Marriott which seems to be a major upgrade from that Pheasant Run Resort that they used to use. I’m sure it was a fine hotel but I’ve heard more complaints about that place than I care to mention.

Anyplace you pick now is not going to be very smoker friendly. It’s something you have to work around. People are just more opinionated nowadays and insist on making their values, everyone’s values.

Maybe when things ever get bad for real and not just in their minds, they won’t be trying to battle imaginary foes. Maybe companies will want your business so bad they let you do something so mundane as lighting your pipe.

I’ll try to get some more information for you all about the show and share it in upcoming Blobs.

Winter In The Books

Seems like we’ve finally shook off the last of winter. Rarely does it go into April, but we had a few snow flakes the other day. Pretty sure it’s history at this point. Now is the time people start getting outside and really enjoying their pipes. Even those of us who smoke indoors love getting out.

There is no need to worry about the blends that stink the place up. Or even cigars that can linger for a week. Light up and watch the birds grab material to make nests with. They seem to have a lot more ambition than I do. Back and forth, back and forth. Maybe I’ll rake up a pile of dead grass and twigs and just leave it under the tree.

Nobody is going to do that for me. The winter took it’s toll on the house and yard and it’s time to start getting it all ship shape. I don’t have the energy for things like this like I used to, which is too bad. It will get done, but after a lot of moaning and groaning.

But if you’re like me, sitting outside when it’s cool out, no bugs and the sun is shining is about as good as it gets. Hope you all get the chance to sit down and enjoy your pipe as you think about all the things you should have done.