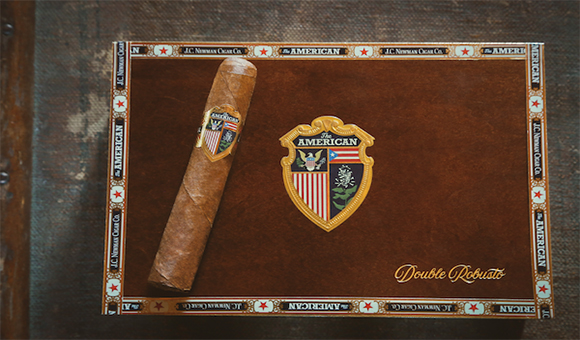 J.C. Newman Cigar Co. is celebrating the 245th Anniversary of American Independence by releasing The American Double Robusto.  Handcrafted in J.C. Newman’s historic El Reloj cigar factory in the “Cigar City” of Tampa, Florida, The American is the first 100% all-American cigar.  This new vitola (5.5” x 56) is the thickest The American cigar to date.  It is packed in boxes of 20 with a suggested retail price of $17.50.

“The United States has a rich tradition of cigar making dating back to the first crop of tobacco planted in Virginia in 1612,” said Drew Newman, fourth generation owner of J.C. Newman.  “Cigar tobacco was grown in every American Colony and many Founding Fathers, including George Washington and Thomas Jefferson, were tobacco farmers.”

The American is rolled with an exclusive Florida Sungrown wrapper, a Connecticut Broadleaf binder, and a blend of Connecticut Havana and Pennsylvania Mennonite filler tobaccos.  With a thicker ring guage, the Double Robusto has an extra leaf of Pennsylvania ligero tobaccos, making it the strongest The American cigar.  All of the packaging, from the wood in the cigar boxes, to the paper for cigar labels, to the cellophane that protects each cigar, is made in the United States as well.

“There is no better way to celebrate the Fourth of July than by lighting up The American,” said Newman.  “There is simply no other cigar like it.”

Cigar enthusiasts who visit J.C. Newman’s 111-year-old El Reloj cigar factory in Tampa can see The American being rolled and learn about the history of American cigar making in the J.C. Newman Cigar Museum.  This year, J.C. Newman is rolling a special vitola of The American, which will be aged for five years and released for the 250th Anniversary of American Independence in 2026.