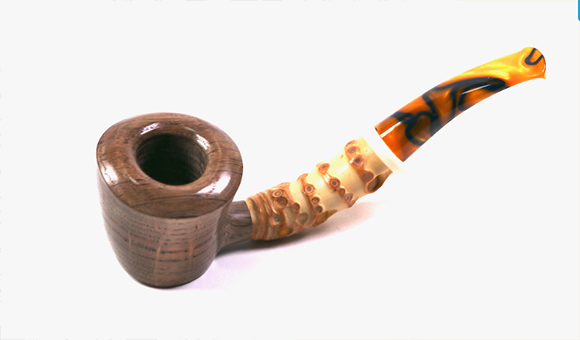 Lately I’ve gotten more pipes and more tobacco than I ever have. Almost feels like I’m on a binge or something, but it was for a purpose. Not that I don’t have enough pipes and tobacco already. But for a couple of reasons I decided that all the things “I’ve been meaning to get”, I’ll stop putting them off and get them here.

Not going to get into the reasons behind it, but let’s just say that if events occurred, or the economy got to the point where you would have to seriously cut back on discretionary spending, I think I would have been very upset. You always have in the back of your mind certain things you want, like a certain pipe to fill out a collection, or a certain amount of a pipe tobacco blend so you don’t have to worry if the availability goes away. I was in that spot.

There were probably four or five pipes that I really wanted and while not a ‘now or never’ situation, I said to myself just get them here and quit worrying about it.

One pipe near the top of the list was from Japan. You always hear me talk about the artisan pipes at Tobacco Pipes Japan, but I’ve never settled on the right one for me. Since they usually have a look that is outside what I’m used to, it was hard to chose the right one. Actually needed a little help getting me pointed in the right direction.

Decided on a pipe from Minoru Nagata. There are a couple of photos today of it, but I can tell you they don’t do the pipe justice. When I often say they are like works of art, I’m not kidding. I feel like I’ve gotten it right out of a museum. This pipe really checks all the boxes for me.

It’s a Morta pipe, which I don’t have many of. The pipe has a bamboo shank. Not just an accent but the majority of the shank, without being too long. Another thing is it has a Mammoth Ivory ornament. I have another pipe with Mammoth, so it wasn’t something I was looking for specifically, but it is so perfect for this pipe.

All of the artisans that are associated with Tobacco Pipes Japan are fantastic, but for me I wanted to at least start with one from Nagata. If you want to get an understanding why, check out this video on him. He makes all his pipes entirely by hand. No machines of any kind. There’s something about that which appeals to the craftsman in me. Not that I am on his level or anything, but I’ve spend many hours at the bench with tiny files making parts by hand. These pipes remind me of that.

To be honest, I don’t think I’m going to smoke this pipe. At least for now. It’s hard to stop staring at it and holding it. The curve of the bowl is perfect and the way the top of the bowl has a radius on it, makes me fear charring it.

After I got over the overall beauty of it and was looking at the elements that make it a smoking pipe there were two things that stood out. One was the design of the stem. It doesn’t just have a button at the end but flares out. It feels so amazing. Right now it’s saying to me that I’d better not dig a tooth into it.

The other is that the draft hole is in the center of the bowl. Not something I’m used to. I’ve heard that pipes like this will smoke better and more evenly. I don’t know if that’s true. We’ll have to find out, but not not anytime soon.

So for now it’s going to be a piece of art. I’m sure the match will turn it into a pipe one day, but I’m going to hold off for now. Just can’t do it. I could go on all day talking about it, but I’ll spare you.

It Was The Sale

What finally made me buy it was the Spring Sale. I know he only has sales a couple times a year and I had been waiting for one. In hindsight, that was a mistake. Not saving money, that part is great. But waiting.

When I was thinking about there being 4 pipes that I really wanted to get, I should have realized that waiting is not smart. It’s not that I’ll only get 4 more pipes the rest of my life, but those are the ones I really wanted in my collection. The attitude I should have taken was, I’m going to get these pipes and when they become available or I find them, I’m going to jump on them.

What if I were to wait around to the next sale and it wasn’t until Fall? That pipe would have been gone. I don’t want to look back years from now and want to kick myself.

The thing with collecting is when you say your collection is complete there will always be more you want. I’m sure that’s true with me as well, but the one’s I’ve been searching for lately I’ve been thinking about for years. There really is a sense of satisfaction when those spots on your rack are finally filled in.

I hope you have a pipe or two you feel the same way about, and I hope that someday they sit on your pipe rack.