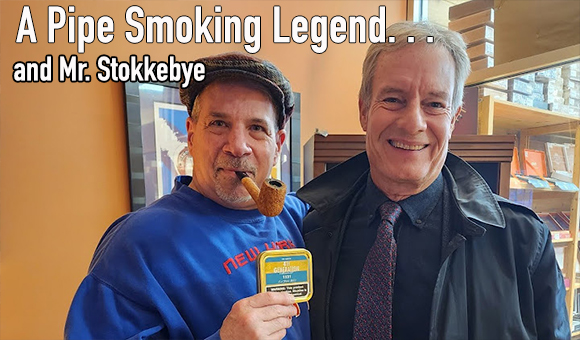 The big news, and I do mean big, was Country Squire Radio announced yesterday that they will be going off the air. Things like that don’t connect until you look back. What I mean is something like the Country Squire Radio show has been such a big part of the pipe smoking community for so long it became a major fixture. But things change over time, even for them. When it goes away, your first reaction is you don’t really believe it. Doesn’t seem possible. But then looking back you can see all they went through to produce that show, and you can’t keep doing that forever.

You can’t look at it from your own perspective, we are not producing the show week in and week out. All we have to do is tune in, they do all the work. It’s a real tough thing to keep producing a show at that level for such a long time, but they pulled it off. At one point doing it on air in front of a camera after the Country Squire Tobacco shop closed for the night. Hosting Christmas parties and Awards Shows, they did it all.

When you look back on their catalog of shows, it really is a gold mine. So much information. In a way it makes me a little sad. My personal way of listening to the show was to download it and listen while I was driving. I can remember certain shows and where I was exactly when I listened. It brings back a lot of memories.

I’m sure it’s going to be the topic of discussion for a while now. It’s great that they went out while they were on top, that’s such a cool thing to do. On the other hand, listening to people talk about the show is going to make me feel a little funny. I’m happy on the one hand, but sad on the other.

It has been a labor of love for a long time, but a labor nonetheless. No matter what you want to do, there is only so much time. And with so much in both Mr. Cole’s and Mr. York’s life, it’s amazing that they kept the show going for as long as it did. 500 episodes. That’s nothing to sneeze at.

I’m sure I’ll have more to say as this news sinks in. I will say this for now, and it’s not bragging or anything like that, so don’t think I’m coming from that direction. But Briar Report has won the Publication of the Year from Country Squire Radio the past three years, and it has been the proudest thing since we started the Briar Report website.

I’ve never taken the website all that serious, but a lot of work does go into it. For them to recognize that, was a major shock and that award has meant more around here than you might think. Pride is a terrible thing, even sinful, so I have to be careful. It certainly was a humbling experience to be singled out by the guys everyone else loves and respects.

They sure had an effect on me, and I’m sure many other people have similar stories. They were so generous with their time and brought so much happiness and knowledge into the pipe smoking hobby. I don’t want to talk about them like they are gone or anything, but it’s hard not to feel a little loss now that the show is being wrapped up.

Well, good luck to both Mr. Cole and Mr. York as they focus on other areas of their lives. In the long run, we couldn’t be happier for you both.

I wonder if Mr. Stokkebye shops at MKELaw-Pipes.com? Sure he probably gets a lot of free pipes, but he must have the itch to collect pipes just like the rest of us. He did say in the video that pipe smoking is a lifestyle. There’s no doubt about that. He also said that briar is becoming a scarce commodity. That’s all the more reason to build your collection from the Estate Market.

No better place to do that is on the MKELaw-Pipes.com website. So many great pipes to choose from, no matter which direction your collection takes. Even if there’s that one pipe that catches your eye and you want to have it for no reason at all. I have a lot of pipes like that. There’s just something about them that attracts you.

All those estate pipes come with a history of their own, whether you know what it is or not, and to keep them going is a wonderful thing.

A Night To Remember At Davidus

Can you imagine sitting in your local cigar lounge smoking a pipe and look over and think to yourself “that guy looks familiar”? That kind of stuff happens. If it were me, someone would elbow me in the ribs and whisper, “hey look, there’s Jackie Mason.”

Something like that happened when Craig from Hiking Pipes went to the Distinguished Pipe Club of Eldersburg Tuesday night smoke, Who do you think dropped by? Erik Stokkebye, which you should have been able to guess by now. I would have fallen out of my chair.

Can you even imagine what Mr. Stokkebye knows and the stories he could tell? The family business goes back to the 1880s and there he is sitting there, chatting with the guys. Very few people in the world are in the position he’s in. Most families run businesses like that into the ground at around the third generation, it’s wiped out by the fourth.

But at the 4th generation in this case the company is going strong. That’s an amazing feat.

Man On The Scene

While the members of the club enjoyed a night to remember, Craig was kind enough to be able to share some of it with us. He recorded a video that is worth watching, and hopefully will fill us in on some of the details in future videos on his channel.

You would think the venue would have some information of their own but they don’t, so we have to totally rely on those present to let us know what happened.

Davidus is a big time Cigar Lounge with over a dozen locations. You would think they would have something on their “news and events” page other than “coming soon”. I shouldn’t make fun, having the world leader in pipe smoking news and information bust their chops might be a little embarrassing. Sorry guys, you have a wonderful chain there.

Thanks also to Craig and it’s a good thing he took pictures or I might not have totally believed him.

The next installment, or issue, of New Content Creators is done and ready to mail. It will come out this coming Monday. I was able to work Ed the Armchair Piper into the article again. That might become a regular little Easter Egg, I’m not sure. It would be cool if I could get him into the article in some funny way each time. The plan is to do this once a quarter.

If there are not a lot of new people, I might do it every six months. We’ll wait and see.